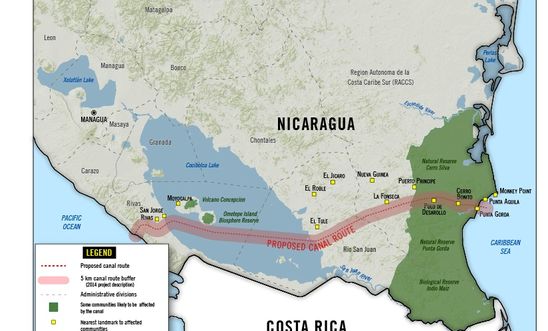 The Nicaraguan government has put business before the future of the country and its people by signing a secretive deal that will lead to the construction of a canal affecting the livelihood of tens of thousands of people and that might leave many homeless, Amnesty can reveal in a new report published today (3 August).

The report Danger: Rights for sale. The Interoceanic Grand Canal project in Nicaragua and the erosion of human rights looks into the obscure legal framework that led to the granting of permission for this huge engineering project, potentially one of the largest on the planet, that will link the Atlantic and Pacific oceans. Amnesty found that it was given the green light without genuine consultation with all of the communities affected, that it violates a catalogue of national and international standards on human rights and might lead to the forced eviction of hundreds of families. Amnesty also found that the authorities have been harassing and persecuting anyone who dares to voice an opinion against the deal.

On June 13 2013, the Nicaraguan congress passed a law that gave the go ahead to the canal and a number of related sub-projects (including an airport, two ports, a pipeline, a railroad track, and two free trade areas). Local organisations have told Amnesty that nearly 120,000 people are likely to be affected, with their homes, livelihoods, access to food, local networks and the very survival of their communities, all at serious risk. The law also leaves the door open to future development projects without ensuring proper consultation with affected communities.

“The authorities in Nicaragua have secretly sold the country’s future to the highest bidder and put thousands of people at risk of losing everything.

“The only way to undo this appalling error is to repeal the law that backs this project before it causes more and permanent damage and go back to the drawing board, ensuring all people who might be affected have a say about their future. Anything else will continue to sideline entire communities and ignore their human rights.

“The fact that the authorities passed this game changer piece of legislation under the table is shocking and utterly unacceptable. The Ortega administration is meant to be protecting its people from powerful economic interests, not the other way around.

“The authorities’ refusal to talk to those who will be most affected by the construction of the canal is absolutely illegal and cruel. It is still not too late to stop this inhuman project and step on the right side of the law.”

The contract for the project has been awarded to HK-Nicaragua Canal Development Investment Co. Limited, based in Hong Kong. The canal will measure approximately 275 kilometres and divide Nicaragua in two. It will cross a large portion of the Great Lake of Nicaragua, the largest source of drinkable water in Central America.

People living in the affected areas have told Amnesty that the government has failed to genuinely consult or even properly inform them about the project or provide any viable alternatives. The authorities have also refused to share information with Amnesty about the project and the process that led to its approval.

A number of people told Amnesty that they only learned about the project when mainly foreigners visited the area with police and military personnel to measure their lands – without a prior agreement with them. They also complained about the lack of information about options for relocation or compensation.

A member of one of the affected communities, who only agreed to speak anonymously out of fear of reprisals, told Amnesty he was at a loss and does not know how he will survive:

“Most of the people who live here live from the land, sowing the land, raising animals, we don’t know how to do anything other than work the land. That’s why we prefer to die here. If we go to the city, what are we going to do?”

Amnesty’s report also reveals the ongoing campaign by the Nicaraguan authorities against anyone daring to protest against the project. At least 90 protests have taken place across the country in the last few years.

Human rights activists working to highlight the possible negative impact of the canal have also told Amnesty they have been harassed and received threats.

A member of one of the communities that will be affected by the project told Amnesty that when she leaves home to take part in one of the protests, “I tell my children good bye because I don´t know if I’m going to make it back.”