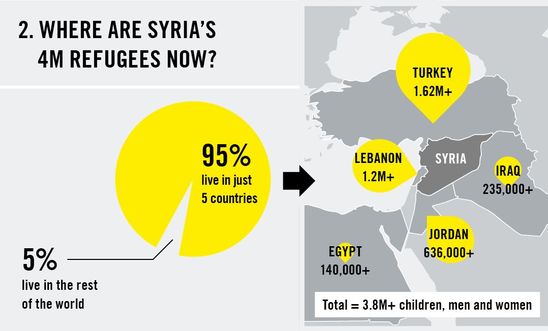 A new report published by Amnesty today (Wednesday 4 February) exposes the horrors faced by Syrian refugees and the continuing failure of the UK government to take its fair share of those people in urgent humanitarian need.

The report is part of Amnesty’s #OpenToSyria campaign, highlighting the extremely small numbers of resettlement places currently offered to Syrian refugees by the UK and many other wealthy nations beyond Syria’s immediate neighbours.

It provides, says Amnesty, further compelling evidence for the need for increased levels of resettlement places and humanitarian admission programmes. So far, around 95% of the refugees - 3.8 million people - are currently settled in neighbouring countries, such as Turkey, Jordan and Lebanon.

Wealthier countries have so far offered a total of just 79,180 resettlement places - less than 20% of those needing humanitarian aid. Although Germany is resettling 30,000 refugees, other European countries have provided very few places - for example, 140 in Denmark and 130 in Spain. To date, the UK has offered just 90 places.

Those featured in the report include a 23-year-old woman trying to care for her four children alone in Lebanon, a gay man facing threats in Jordan, and the family of a 12-year-old boy with cancer in need of medical treatment in Iraq. Other cases include include torture and rape survivors, sick or unaccompanied children and others who are considered vulnerable.

“With close to four million refugees, the scale of the crisis is overwhelming. This report tells the stories of the real people behind the numbers, in their own words.

“Refugees are ordinary people just like the rest of us, but their lives have often been catastrophically destroyed as a result of conflict and they are forced to start from scratch.

“Many of them have been through hell, they have endured heart-breaking ordeals and face daily struggles in their current lives as refugees. Resettlement can help offer them a much needed lifeline - a glimmer of hope for a better future.

“World leaders cannot go on turning their backs on vulnerable refugees. It’s easy to feel helpless when facing a crisis of this magnitude but encouraging world leaders to resettle refugees can have a life-changing impact.”

For people like Yara, a 23-year-old woman with four children, resettlement would make a huge difference. Her two-year-old son, Mutanama has an opening in his spine which leaks fluid into his brain. Since her family moved to Lebanon his condition has got worse. Her husband had been arrested in Syria, she found out he had been killed in a video posted on YouTube. As a single woman in Lebanon she has also faced sexual harassment and is unable to afford the high rental prices for accommodation.

“Everything is full of difficulties as a refugee,” she says. “A lot of bad people say bad stuff about me and harass me … It’s a difficult life, I can hardly manage.”

Another Syrian family that fled to a refugee camp in the Kurdistan region of Iraq have struggled to be able to treat their 12-year-old son Elias who was diagnosed with cancer in 2012.

“Life is very difficult here because we need doctors and medication for Elias. We have really suffered to get treatment for him,” says Elias’s father, Maher. He is desperately hoping to be resettled in Europe where he can get proper treatment for his son.

Hamood, a young gay man from Dera’a in southern Syria now lives in Jordan where he faces threats and routine harassment on the streets. His told Amnesty that his brother tried to murder him because of his sexual orientation and he was raped by six men. He yearns to return to his home country but says “in Syria there’s only death”.  He is hoping to be resettled in Europe where he can live as an openly gay man without fear of harassment and fulfil his dreams of finding a job and falling in love. “If I go [to Europe] I will be reborn,” he says.

Jamal and Said are a gay couple who were journalists and opposition activists in Syria. They were arrested and detained in Syria because of their political activities. Jamal is HIV positive. His health sharply deteriorated while he was in prison in Syria where he was held in solitary confinement and denied medical treatment. In Lebanon, the treatment is extremely expensive. He tried to commit suicide when he discovered how much it would cost. Both men feel that in Lebanon their lives are on hold. They are desperate to start over, to complete their education and to work and become “productive members of society”.

Qasim, is a Palestinian refugee from Syria who fled Syria after he was injured when his home was destroyed in a bombing. He and his daughter both suffer from elephantiasis and are unable to find proper treatment. The condition has caused his leg to swell abnormally. He is desperate to ensure his daughter can be treated. “I am waiting to die,” he says. “I really don’t care if I get treated but I want my daughter to get treated.”

For all these people, the prospect of resettlement offers a crucial escape from the suffering of their current lives.

Around 95% of refugees from Syria - some 3.8 million people - are being hosted in five main countries within the region: Turkey, Lebanon, Jordan, Iraq and Egypt. The UN refugee agency has identified 380,000 refugees in those countries as in need of humanitarian resettlement. So far however just 79,180 resettlement places have been offered globally by wealthier countries, a fifth of what is needed.