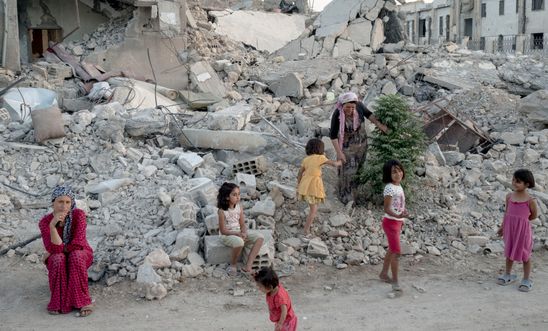 A family stands on what is left of their home in Kobani, Syria, August 2015 © Lorenzo Meloni/Magnum Photos

Vietnam, Chechnya, Bosnia, Iraq, Syria all feature in new exhibition as part of Amnesty’s 'I Welcome' campaign and to mark Magnum’s 70th anniversary

“After the horrors of the Second World War, the international community made a commitment to provide sanctuary to refugees, yet its response to the current crisis has been pitiful” – Tom Davies

Amnesty International UK and Magnum Photos will be hosting a new outdoor exhibition of powerful photographs of past and present refugee crises, starting next week on London's South Bank.

Taking place from Wednesday 7 - Sunday 18 December, the exhibition will explore the experiences of those uprooted by conflict and persecution over 70 years since the Second World War. From 1940s Greece to Syria today, the 30 striking pictures from Magnum photographers show the reasons why people are forced to flee, the challenges they face on their journeys to safety and what happens when they make it.

The exhibition is part of Amnesty’s I Welcome campaign, calling on the UK to share responsibility in responding to the refugee crisis, including by providing safe and legal routes for refugees to find sanctuary here. The campaign also highlights the many acts of welcome and solidarity towards refugees from local communities across the country.

Magnum was founded in 1947 by photographers Robert Capa, David ‘Chim’ Seymour, Henri Cartier-Bresson and George Rodger, who had all covered the Second World War. It will be celebrating its 70th anniversary next year.

Displayed on ten rectangular 2m-high light boxes along the South Bank, the earliest photographs in the exhibition are David ‘Chim’ Seymour’s images of child refugees in Greece in 1946, juxtaposed with Chien-Chi Chang’s photograph of a mountain of lifejackets abandoned in Lesbos taken just earlier this year. Others include Philip Jones Griffiths' 1968 image of a child running from a bombing raid in Vietnam, Thomas Dworzak’s Chechen refugee children playing in the snow in neighbouring Ingushetia in 1999, and Lorenzo Meloni’s recent image of a Syrian family in front of the rubble which used to be their home.

“Photography can be a powerful way of telling a story and these photos remind us that people have been fleeing conflict and persecution throughout history. After the horrors of the Second World War, the international community made a commitment to provide sanctuary to refugees, yet its response to the current crisis has been pitiful.

“Governments are responsible for ensuring the right to asylum, and ordinary people too have a vital role to play in welcoming refugees. Over the years, many people have done just that. Today, across the UK and further afield, the British public are going to incredible lengths to show solidarity with and welcome refugees.

“We want and need the same attitude from our government. There are historical examples of the UK playing a leading role in responding to refugee crises but now, while the government refuses to share responsibility with others for hosting refugees, leaving some of the poorest countries to accommodate the biggest numbers, more and more people are being forced into the hands of smugglers and into risking their lives on ever more dangerous journeys.”

What: I Welcome: An Amnesty International and Magnum Photos exhibition of photographs of refugee crises past and present

When: Wednesday 7 December until Sunday 18 December

Where: London’s South Bank, between Gabriel’s Wharf and the National Theatre http://coinstreet.org/wp-content/uploads/2015/01/Coin-Street-outdoor-sites-to-hire-aerial-images1.pdf

Amnesty has accused world leaders of the richest countries, including the UK, of a failure of leadership on the refugee crisis. The UK’s response had seen only 2,898 Syrians resettled here by June, the most recent figures available, from a total of five million refugees from that country. Worldwide, conflict and persecution have forced over 21 million people flee across borders, yet the response of many countries, including some of the richest, has been to effectively raise the drawbridge and do what they can to keep some of the world’s most vulnerable people out. With fewer safe and legal routes to safety, refugees are having to take ever more dangerous journeys, which pushes them further into the hands of smugglers.

In 1937 when the Basque government asked the Prime Minister Stanley Baldwin to take in child refugees to protect them from Franco’s bombs, he refused, until a popular campaign forced him into a U-turn and 4,000 unaccompanied children sailed from Bilbao to Southampton and were then supported by local communities across the country. Meanwhile, despite a backlash from some parts of the media, many Jewish refugees who came to the UK in the 1930s and 1940s say how welcomed they felt. In 1956, the UK agreed to welcome 20,000 refugees from the Soviet occupation of Hungary over the course of just a few months as part of a ground-breaking international resettlement operation, and there are also reports of British people collecting supplies and driving them 1000 miles across Europe for refugees in camps on Hungary’s borders.