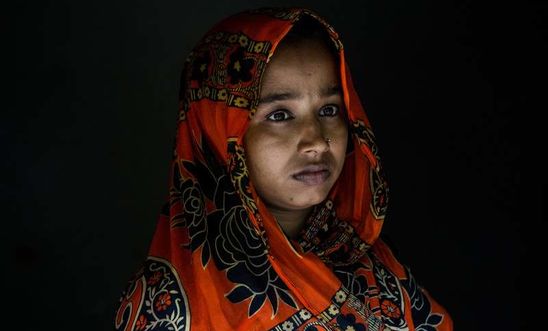 ‘I saw men holding the heads and hair of the women and others were holding knives. And then they cut their throats’ – Hindu survivor

A Rohingya armed group brandishing guns and swords massacred Hindu men, women and children last summer, ahead of the campaign of violence amounting to ethnic cleansing carried out by Myanmar’s security forces, Amnesty International revealed today after carrying out a detailed investigation inside Myanmar’s Rakhine State.

The Arakan Rohingya Salvation Army (ARSA) is responsible for at least one, and potentially a second, massacre of around 100 Hindu women, men, and children as well as additional unlawful killings and abductions of Hindu villagers in August 2017, the investigation found.

Based on dozens of interviews conducted in Rakhine State and across the border in Bangladesh, as well as forensic pathologists’ analysis of photographic evidence, the organisation revealed how Rohingya fighters sowed fear among Hindus and other ethnic communities with a series of brutal attacks.

“It’s hard to ignore the sheer brutality of ARSA’s actions, which have left an indelible impression on the survivors we’ve spoken to. Accountability for these atrocities is every bit as crucial as it is for the crimes against humanity carried out by Myanmar’s security forces in northern Rakhine State.

“In this brutal and senseless act, members of ARSA captured scores of Hindu women, men, and children and terrorised them before slaughtering them outside their own villages. The perpetrators of this heinous crime must be held to account.

“ARSA’s appalling attacks were followed by the Myanmar military’s ethnic cleansing campaign against the Rohingya population as a whole. Both must be condemned – human rights violations or abuses by one side never justify abuses or violations by the other.

“All the survivors and victims’ families have the right to justice, truth, and reparation for the immense harm they have suffered.”

At around 8am on 25 August 2017, ARSA attacked the Hindu community in the village of Ah Nauk Kha Maung Seik, in a cluster of villages known as Kha Maung Seik in northern Maungdaw Township. At the time of the attack, the Hindu villagers lived in close proximity to Rohingya villagers, who are predominantly Muslim. Rakhine villagers, who are predominantly Buddhist, also lived in the same area.

Armed men dressed in black and local Rohingya villagers in plain clothes rounded up dozens of Hindu women, men and children. They robbed, bound, and blindfolded them before marching them to the outskirts of the village, where they separated the men from the women and young children. A few hours later, the ARSA fighters killed 53 of the Hindus, execution-style, starting with the men.

Eight Hindu women and eight of their children were abducted and spared, after ARSA fighters forced the women to agree to “convert” to Islam. The survivors were forced to flee with the fighters to Bangladesh several days later, before being repatriated to Myanmar in October 2017 with the support of the Bangladeshi and Myanmar authorities.

Bina Bala, a 22-year-old woman who survived the massacre, told Amnesty:“[The men] held knives and long iron rods. They tied our hands behind our backs and blindfolded us. I asked what they were doing. One of them replied, ‘You and Rakhine are the same, you have a different religion, you can’t live here. He spoke the [Rohingya] language. They asked what belongings we had, then they beat us. Eventually I gave them my gold and money.”

All eight survivors interviewed by Amnesty said they either saw Hindu relatives being killed or heard their screams. Raj Kumari, 18, said: “They slaughtered the men. We were told not to look at them … They had knives. They also had some spades and iron rods. … We hid ourselves in the shrubs there and were able to see a little … My uncle, my father, my brother – they were all slaughtered.”

Formila, around 20, told Amnesty that she did not see when the Hindu men were killed, but that the fighters “came back with blood on their swords, and blood on their hands” and told the women the men had been killed. Later, as Formila and the other seven abducted women were being marched away, she turned back and saw ARSA fighters kill the other women and children. “I saw men holding the heads and hair [of the women] and others were holding knives. And then they cut their throats,” she said.

According to a detailed list of the dead, given to Amnesty, the victims from Ah Nauk Kha Maung Seik include 20 men, 10 women, and 23 children, 14 of whom were under the age of eight. This is consistent with multiple testimonies the organisation gathered in both Bangladesh and Myanmar, from survivors and witnesses as well as Hindu community leaders.

The same day, all of the 46 Hindu men, women, and children in the neighbouring village of Ye Bauk Kyar disappeared. Members of the Hindu community in northern Rakhine State presume the community was killed by the same ARSA fighters. Combined with those from Ah Nauk Kha Maung Seik, the total death toll is believed to be 99.

The bodies of 45 people from Ah Nauk Kha Maung Seik were unearthed in four mass graves in late September 2017. The remains of the rest of the victims from that village, as well as all 47 from Ye Bauk Kyar, have not been found to date.

ARSA’s other unlawful killings of Hindus

Amnesty has also documented ARSA’s involvement in other killings and violent attacks against members of other ethnic and religious communities.

On 26 August 2017, ARSA members killed six Hindus – two women, a man, and three children – and injured another Hindu woman on the outskirts of Maungdaw town, near Myo Thu Gyi village.

Kor Mor La, 25, was one of two women who survived the attack, along with four children. Her husband Na Ra Yan, 30, and five-year-old daughter Shu Nan Daw were both killed. “The people who shot us were dressed in black. … I couldn’t see their faces, only their eyes. … They had long guns and swords,” Kor Mor Lar said. “My husband was shot next to me. I was shot [in the chest]. After that I was barely conscious.”

The killings came just days after ARSA fighters unleashed a series of attacks on around 30 Myanmar security posts on 25 August 2017, prompting an unlawful and grossly disproportionate campaign of violence by Myanmar’s security forces. Amnesty and others have documented in detail how this campaign was marked by killings, rape and other sexual violence, torture, village burning, forced starvation tactics, and other violations which constitute crimes against humanity under international law. More than 693,000 Rohingya people were forced to flee to Bangladesh, where they still remain.

Tens of thousands of people from other ethnic and religious communities were also displaced within Rakhine State during the violence. Although most have returned to their homes, some continue to live in temporary shelters, either because their homes were destroyed or because they fear further ARSA attacks if they return to their villages.

At a UN Security Council meeting last week, Myanmar’s permanent representative criticised some in the UN for only listening to “one side” of the story and failing to acknowledge abuses committed by ARSA.

“The Myanmar government cannot criticise the international community as being one-sided while at the same time denying access to northern Rakhine State. The full extent of ARSA’s abuses and the Myanmar military’s violations will not be known until independent human rights investigators, including the UN Fact-Finding mission, are given full and unfettered access to Rakhine State.”