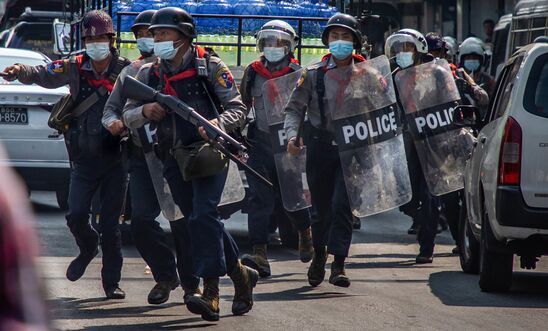 Death toll at 61 before the weekend, with numerous casualties since

The Myanmar military is using battlefield weaponry against peaceful protesters and bystanders across the country, new research by Amnesty International has confirmed, while disturbing footage also appears to show people being killed in cold blood in the streets.

After verifying more than 50 videos from the ongoing crackdown, Amnesty’s Crisis Evidence Lab can confirm that Myanmar’s military are increasingly armed with weapons that are only appropriate for the battlefield, not for policing. Amnesty has verified multiple clips showing lethal force being used in a planned, premeditated and coordinated manner.

Members of the military can be seen engaging in lethal and reckless behaviour, including the indiscriminate spraying of live ammunition in built-up areas. Many of the killings documented amount to extrajudicial executions.

In one video taken in Sanchaung township in Yangon on 2 March, a commander can be seen standing over an officer operating a sniper rifle. The commander appears to be giving him orders to direct fire towards specific protesters.

In a disturbing clip from 3 March in North Okkalapa township, Yangon, officers are seen leading a man towards a larger group of security forces. The man appears to be in the group’s custody and offers no visible resistance, when an officer suddenly shoots him. He immediately drops to the ground, apparently lifeless. Officers then drag him away.

Two people were killed and several more injured in Myitkyina, Kachin State on 8 March. In one verified clip, a group of people can be seen running from a thick cloud of smoke as gunshots sound in the distance. Panicked voices can be heard saying, “It burns so much” and “One person has died,” amid screams of shock as a person with a serious head injury is being carried away. Several apparently injured people are then seen being dragged away, leaving pools of blood on the ground.

In another verified clip dated 28 February, a member of the military in Dawei is seen apparently lending his rifle to a police officer deployed alongside him. The officer crouches, takes aim and shoots, before a group of officers standing with them celebrate.

“These are not the actions of overwhelmed, individual officers making poor decisions. These are unrepentant commanders already implicated in crimes against humanity, deploying their troops and murderous methods in the open.

“The weaponry deployed by the Myanmar military reveals a deliberate and dangerous escalation in tactics.

“Each new day shows an apparent order to deploy semi-automatic rifles, sniper rifles, and light machine guns in increasing numbers. Make no mistake, we are in a deadly new phase of the crisis.

“These Myanmar military tactics are far from new, but their killing sprees have never before been livestreamed for the world to see.

“We have called on the UN Security Council to refer the situation in Myanmar to the International Criminal Court, and bring senior commanders, including Min Aung Hlaing, to justice. Instead the Security Council has done nothing, and today we see the same military units turn their fire on protesters.”

According to the UN Special Rapporteur on the situation of human rights in Myanmar, the death toll from the protests stood at 61 before the weekend - though this excludes further casualties in recent days.

The 55 clips analysed by Amnesty, filmed from 28 February to 8 March, were recorded by members of the public and local media in cities including Dawei, Mandalay, Mawlamyine, Monywa, Myeik, Myitkyina and Yangon.

On 5 March, state-run media in Myanmar quoted the military authorities denying any role in fatalities, claiming that “unscrupulous persons [might be] behind these cases”.

However, Amnesty has identified security forces armed with a variety of military firearms, including Chinese RPD light machine guns, as well as local MA-S sniper rifles, MA-1 semi-automatic rifles, Uzi-replica BA-93 and BA-94 submachine guns, and other arms manufactured in Myanmar. These weapons are completely inappropriate for use in policing protests. According to UN guidelines, security forces should refrain from the use of firearms unless there is an imminent threat of death or serious injury, and there is no suitable alternative available.

This deployment follows the excessive use of tear gas, water cannon, South Korean Dae Kwang DK-44 flashbang grenades and other controversial “crowd control” methods, as well as incidents of beatings by members of the security forces, such as in this verified clip filmed in Mandalay on 7 March.

Photos and videos also show that police have access to equipment such as “pepperball” launchers, and shotguns loaded with rubber bullets manufactured by the Turkish company Zsr Patlayici Sanayi A.S., using cartridges from Franco-Italian company Cheddite.

Reckless and indiscriminate use of lethal weapons

Amnesty has also verified footage of the security forces using lethal weapons in ways that are reckless, indiscriminate and very likely to cause fatal injuries.

In a clip from Yangon’s Hledan township published on 28 February, the man recording the footage is peering over a balcony and describing the scene below, where armed forces personnel appear to be shooting teargas and ammunition directly at people in the street. Huddled with others on the balcony he continues to record the scene, when a group of officers at street level seem to spot him filming. A single shot can be heard before people on the balcony say “[someone has been] hit! Get inside [the apartment]!”. A woman on the balcony can then be seen lying with a head injury.

Further analysis of photos and videos shows that the military units involved in this lethal repression include the Yangon Command, Northwestern Command, and the 33rd, 77th and 101st Light Infantry Divisions, often operating alongside - and sometimes lending their weapons to - police officers.

According to footage examined by Amnesty, the 33rd Light Infantry Division is currently deployed in Mandalay, the 77th in Yangon, and the 101st in Monywa. All three cities have seen extreme instances of excessive force, including killings, by security forces in recent days. Some of these military divisions are notorious for atrocities and serious human rights violations committed in Rakhine, Kachin, and northern Shan states. Amnesty has implicated soldiers from the 33rd Light Infantry Division in war crimes in northern Shan State in 2016 and 2017, and in crimes against humanity against the Rohingya in Rakhine State in 2017.