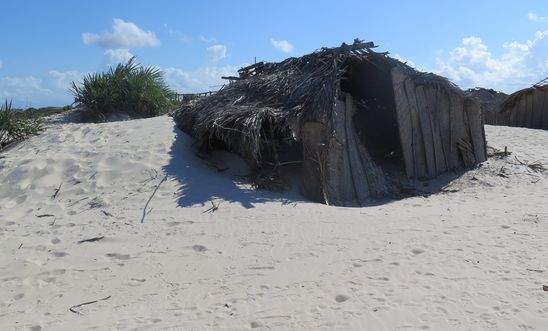 Homes in Nagonha were destroyed by flooding in 2015.

An irresponsible Chinese mining operation in Mozambique has put an entire coastal village of more than 1,000 people at serious risk of being washed into the Indian Ocean, Amnesty International revealed today in a new report.

The 38-page report - Our lives mean nothing: the human cost of Chinese mining in Nagonha, Mozambique - exposes how the operations of Chinese mining company Haiyu likely contributed significantly to a flash flood in 2015 in the village of Nagonha, which destroyed 48 homes and left 270 people homeless.

The Mozambican authorities’ failure to regulate the industry in the wake of this disaster has also contributed to the risks to the village from the company’s ongoing mining operations.

“The devastating flooding in 2015 should have been the catalyst for the Mozambican authorities to address Haiyu’s activities by implementing proper regulation.

“Their inaction has left the people of Nagonha at the mercy of a company that puts the pursuit of profit ahead of people’s lives. Left unchecked, Haiyu’s mining operations pose a grave danger of further catastrophic flooding that could wipe Nagonha off the map.”

On top of the 48 houses destroyed by the flooding in 2015, local government authorities also recorded 173 more as partially destroyed. Local elders and authorities who had lived in Nagonha for more than 70 years told Amnesty that they had no record of such floods occurring previously.

Based on detailed analysis of satellite images, testimony from Naghona residents and evidence from environmental experts, the report shows how the environmental impact of Haiyu’s mining operations likely contributed to the 2015 flooding.

Comparison of satellite images of the area between December 2010 and October 2014 show the build-up of mining-related sand deposits around Nagonha and the gradual change in the natural flow of water.

All of the available evidence strongly suggests that Haiyu’s mining activities - and in particular the way it deposited sand across the landscape - placed the coastal village at heightened risk of flooding and likely contributed significantly to the 2015 flood.

This analysis corresponds with the testimony gathered from Nagonha residents, as well as with the opinions of independent environmental experts who confirmed that Haiyu’s mining operations significantly increased the risk of flooding.

Amnesty found that Haiyu did not conduct a proper environmental impact assessment or consult with the community prior to establishing its business, despite local legislation requiring it to do so.

Amnesty interviewed 35 residents affected by the 2015 flooding who lost their personal belongings and livelihoods.

One resident, Roma, told Amnesty how he lost everything that he worked for: “Four of us lived in the house – me, my wife, my son and my younger brother. There were so many things in the house – four chickens, a bed, a solar panel…clothes and shoes, plates, pots, and basins. We lost all of that.”

Tola, a local fisherman, said: “I lost all my fishing tools…the boat buoys, two bags of rice, cooking utensils, the clothes of my five kids, my wife and myself. My house was new. We should be compensated for our losses.”

Haiyu has refused to provide compensation to the villagers who were left homeless.

In its response to Amnesty’s report the company has denied responsibility for the 2015 flood, citing a natural event on a scale not seen for 100 years.

Haiyu rejected Amnesty’s assertion that its operations caused environmental impact and detailed the work which it did to assist in the flood response in the region. The company’s full letter of response is attached to the report.

“Unsurprisingly, instead of taking responsibility for the destruction of people’s homes and livelihoods, the company is evading its responsibility to do the right thing.

“This is a classic case that highlights the struggles that poor communities face when big corporates ride roughshod over their rights and governments fail in their duty to protect the most vulnerable.”

Amnesty is calling for the Mozambican authorities to investigate the company for breaches of the country’s laws. Amnesty is also calling on the authorities to ensure that residents of Nagonha have access to effective remedies and reparation for their loss.

Nagonha is a rural fishing village, with approximately 1,329 residents living in 236 huts about 110 miles east of Nampula City.

The village is located inside a mining concession which was awarded to Chinese mining company, Haiyu Mozambique Mining Co. Lda, a subsidiary of Hainan Haiyu Mining Co. Ltd based in China, on 19 December 2011.

The company has been mining heavy sand minerals, namely ilmenite, titanium and zircon. Haiyu began mining about two miles north of the village and continued southwards toward the village, bulldozing sand dunes, clearing vegetation and dumping mining waste over the wetland, burying two major lagoons and the waterways that connected them and the wetland to the sea.