Migrants heading for Europe facing abuse and extortion in the Balkans 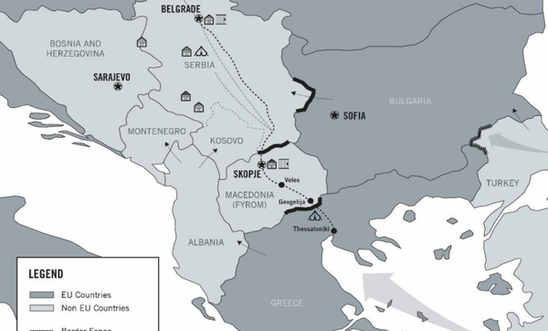 “Serbia and Macedonia have become a sink for the overflow of refugees and migrants that nobody in the EU seems willing to receive.” - Gauri van Gulik

Thousands of refugees, asylum-seekers and migrants – including children – making dangerous journeys across the Balkans are suffering violent abuse and extortion at the hands of the authorities and criminal gangs and being shamefully let down by a failing European Union (EU) asylum and migration system which leaves them trapped without protection in Serbia and Macedonia, Amnesty International said in a new report.

Europe’s borderlands: Violations against migrants and refugees in Macedonia, Serbia and Hungary, finds that an increasing number of vulnerable people are being left stranded in legal limbo across the Balkans. The situation is exacerbated by “push-backs” or deportations at every border, restricted access to asylum en route and a lack of safe and legal routes into the EU.

Testimony from more than 100 refugees and migrants reveal shocking conditions facing those who travel the western Balkans route – which has overtaken the Mediterranean route to become the busiest irregular passage to the EU. There has been a 24 fold increase in the number of people apprehended crossing the Serbia-Hungary in the last five years (from 2,370 in 2010 to 60,602 this year).

Of more than 21,000 refugees and migrants who took the Western Balkans route last year, more than half were from Syria and others came from Afghanistan, Egypt, Eritrea, Iraq, Nigeria, Somalia, Sudan and Tunisia.

“Refugees fleeing war and persecution make this journey across the Balkans in the hope of finding safety in Europe only to find themselves victims of abuse and exploitation and at the mercy of failing asylum systems.

“Serbia and Macedonia have become a sink for the overflow of refugees and migrants that nobody in the EU seems willing to receive.

“Serbia and Macedonia have to do much more to respect migrants and refugees’ rights. But it is impossible to separate the human rights violations there, from the broader pressures of the flow of migrants and refugees into and through the EU, and a failed EU migration system.

“As increasing numbers of vulnerable refugees, asylum-seekers and migrants become trapped in a Balkan no-man’s land, the pressures on Serbia and Macedonia are mounting. These stresses, like those on Italy and Greece, can only be resolved by a much broader rethink of EU migration and asylum policies.”

The route which takes refugees and migrants by sea from Turkey to Greece and then over land across Macedonia to Serbia and into Hungary is less deadly than the sea crossing from Libya but it is still fraught with dangers and obstacles. Since January 2014, 123 refugees, asylum-seekers and migrants have drowned attempting the sea crossing to Greece and 24 have been killed on railways.

‘We are going from death to death’
Arrivals to the Greek islands face appalling reception conditions and most travel to Athens before attempting to cross into Macedonia en route to other EU countries.

At Macedonia’s border with Greece, and at Serbia’s border with Macedonia, refugees and migrants are routinely subjected to unlawful push-backs and ill-treatment by border police. Many are forced to pay bribes. One witness told Amnesty that Serbian Border Police near the Hungarian border threatened to return his group to Serbia if they refused to pay €100 each.

One Afghan refugee told Amnesty how he was part of a group pushed back to Greece by Macedonian police. “I saw men badly beaten. They beat my 13-year-old son. They beat me too,” he said.

Refugees and migrants are also vulnerable to financial exploitation by smugglers and attacks by criminal groups. Two Nigerian men told Amnesty how they were held up in Macedonia: “Nine men attacked us with knives. We went to the police to ask for help…but they arrested us”.

Failing asylum systems
Individuals who attempt to seek asylum in Serbia or Macedonia face severe obstacles. In 2014, only 10 asylum seekers were granted refugee status in Macedonia and only one was granted asylum in Serbia. Discouraged by the slow progress in processing asylum applications, most asylum seekers continue their journey into Hungary, where they face further violations of their rights.

Those detected entering Hungary irregularly are routinely detained, often in overcrowded and degrading conditions, or ill-treated by police officers.

Hungary’s Prime Minister and Foreign Minister have ratcheted up anti-migration rhetoric recently and last Tuesday Hungary’s Parliament gave a green light for a list of “safe” transit states to be drawn up, where it believes refugees could have sought asylum before reaching Hungary.

Flawed EU migration policies
The ever-growing number of migrants and refugees taking the Balkan route is a consequence of a broader failure of EU migration and asylum policy, over which Serbia and Macedonia have no control. Placing the primary responsibility for processing asylum applications on the first EU country of entry and limiting safe and legal avenues of entry has put an unsustainable strain on the EU’s outer fringes and neighbouring states.