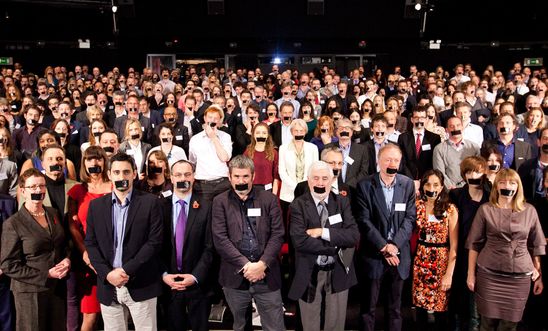 The Sunday Times, The Daily Record, GQ and The Guardian were just some of the winners at the prestigious Amnesty International Media Awards which took place at the British Film Institute in central London this evening (Tues 11 Nov).

There were wins for Pete Pattisson (The Guardian), Marcel Mettelsiefen (Channel 4), Paul O’Hare (Daily Record) and AA Gill (Sunday Times magazine). GQ’s Ed Caesar scooped his third Amnesty Award while Marcus Bleasdale picked up his second for photojournalism.  BBC Radio 4’s Mike Thomson won a record-breaking fourth Amnesty Award for his radio piece – Escape to Sinai – the most times any journalist has won an Amnesty Award for the same category.

Tribute was also paid to the more than 90 journalists killed because of their work this year, including American journalists James Foley and Steven Sotloff.

During the ceremony, Amnesty recognised the plight of the imprisoned Al Jazeera journalists, Mohamed Fahmy, Peter Greste and Baher Mohamed. Sue Turton – one of the three other journalists sentenced in absentia with the Al Jazeera Three – and Peter Greste’s brother, Andrew – spoke about the situation facing the imprisoned three, and the threats facing journalists who cover conflicts and human rights issues.  This was followed by a moment of solidarity with the 400-strong audience taping their mouths as a form of silent protest.

“It is encouraging to know that journalists and organisations like Amnesty International have not forgotten my brother and his colleagues who are behind bars just for doing their job.  We will campaign tirelessly until we see Peter, Mohamed and Baher freed.”

“In spite of the ever increasing level of danger and threat faced by journalists who seek to reveal the truth and expose human rights abuses, the quality of journalism and reportage we’ve seen at this year’s Amnesty Media Awards is truly outstanding.

"Through intelligent, compassionate and dignified reporting, the winning journalists have revealed some of the worst atrocities of 2014, from war zones of Central African Republic and Syria, to the sewers of Bucharest and detention centres in the UK.

“It’s so inspiring to see human rights journalism of this calibre. Well done to all those who produced the work and gave it their editorial backing. It’s truly valuable work.”

Colombia - caught in the crossfire

The shirt on your back: the human cost of the Bangladeshi garment industry

Who is Dayani Cristal?

Dispatches: Children on the frontline; Unreported World: Dancing in the danger zone

Hell is other people

Descent into Hell: Bloodshed in the Central African Republic

Bucharest's King of the Sewers