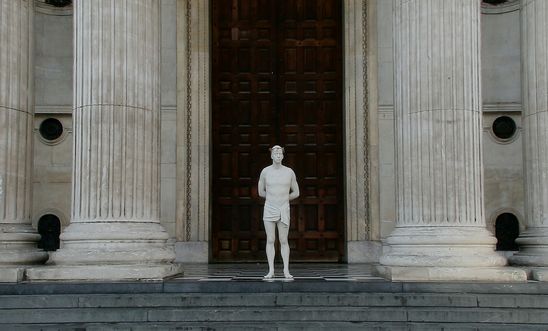 Amnesty International, St Paul’s Cathedral and renowned artist Mark Wallinger are collaborating to highlight the plight of all those currently in prison, suffering torture or facing execution because of their political, religious or other conscientiously-held beliefs.

Mark Wallinger’s ‘Ecce Homo’ was installed earlier this morning on the steps of St Paul’s in central London, where it will remain for six weeks.

The life-size sculpture shows the figure of Jesus Christ, hands bound behind his back and wearing a crown of barbed wire, as he awaits judgement moments before he was sentenced to death.

Famously the first sculpture to appear on the fourth plinth in Trafalgar Square in 1999, ‘Ecce Homo’ presents Christ as a lone man standing before a hostile crowd, representative of a political leader judged for his beliefs.

Mark Wallinger, who won the Turner Prize in 2007, said:

“This vulnerable figure stands at the top of the steps outside the entrance to St Paul’s Cathedral as we approach Easter to highlight the plight of people around the world who are imprisoned and whose lives are threatened for speaking the truth, for what they believe.

“It is an enormous privilege to work with St. Paul’s and Amnesty International to shine a light on human rights abuses.”

“The phrase ‘Ecce Homo’ means ‘Behold the man’, and as we behold the sculpture of Jesus of Nazareth, so we also urgently bring to mind people in our own day who are imprisoned and under sentence of execution for their belief and conscience.

“Amnesty has a long history of opening the world’s eyes and hearts to those whose human dignity is being abused in this way. We are delighted to join with them in enabling Mark’s remarkable work to be placed at St Paul’s both for quiet reflection and as a call for justice.”

“The story of Christ – arrested, tortured and executed for peacefully expressing his opinions and for challenging the authorities of the time – still resonates around the world today.

“The sculpture is a strikingly vulnerable figure and is representative of the type of cases that we at Amnesty still work on today – the oppressed individual caused to suffer simply for their beliefs.

“It is an honour to work alongside Mark and St Paul’s to make this historic piece of art accessible to the public to help raise awareness of individuals still at risk all around the world today.”

The sculpture will remain in place on the steps of St Paul’s until Monday 22 May and is free of charge to visit.