Malawi: new wave of killings and attacks against people with albinism 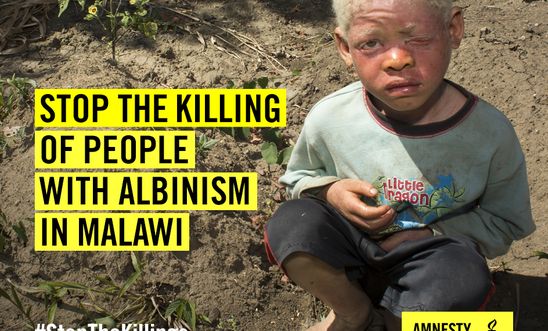 Mercy, a 31-year-old woman with albinism, was found dead with her hand, right breast and hair removed

A new wave of killings and attacks in Malawi targeting people with albinism over the past six months is being fuelled by systemic failures in the country’s criminal justice system, Amnesty International said today on International Albinism Awareness Day (13 June).

Since January 2017, at least two people with albinism have been killed, whilst seven more have reported crimes such as attempted murder or abduction. This stands in stark contrast to the last six months of 2016, when no such incidents were reported.

“Despite stronger legislation, including reforms to the Penal Code and the Anatomy Act, to tackle attacks against people with albinism, we are seeing an alarming resurgence of killings and attacks against this vulnerable group in 2017.

“When the wheels of justice turn so painfully slowly, as they do in Malawi, and historic cases of attacks on people with albinism remain unresolved, it creates a climate of impunity and emboldens suspected perpetrators of these horrific crimes.”

In its June 2016 report, Amnesty revealed how people with albinism were “hunted” and killed “like animals” for their body parts. Their bones are believed to be sold to practitioners of traditional medicine in Malawi and Mozambique for use in charms and magical potions associated with wealth and good luck.

On 28 February 2017, Mercy Zainabu Banda, a 31-year-old woman with albinism was found murdered in Lilongwe with her hand, right breast and hair removed.

On 10 January 2017, 19-year-old Madalitso Pensulo was killed after he was invited for afternoon tea at his friend’s house in Mlonda village in Thyolo District. A passer-by heard him scream, but he died before the police arrived at the scene.

The most recent abduction took place on 28 May, when a nine-year-old boy, Mayeso Isaac, was taken by a gang of 10 men. The incident took place in neighbouring Mozambique where he had travelled to visit relatives. Both Malawian and Mozambican authorities have an obligation to ensure speedy and effective investigation into his disappearance.

In April, two-year-old Misheck Samson survived a kidnapping while he was sleeping next to his mother in Cholwe Village in Ntchisi. Three men were arrested for planning to abduct the toddler. They confessed to the police that they wanted to kidnap him because they needed money.

On 9 March, Gilbert Daire, survived an attack after four men attempted to drill through the wall of his home in Lilongwe as he slept. They fled the scene after his neighbours intervened. One of the suspected perpetrators was arrested after community members turned him over to the police, but he was later acquitted by the court.

On 17 February, Emily Kuliunde, a 36-year-old woman, survived an attempted abduction in Dowa after her alleged abductors were apprehended by the community and handed to the police. The suspects remain in police custody.

On 1 February, Amos Jemus, from Ntcheu district near the Mozambique border, was allegedly threatened to be sold by his father.

In Malawi, police are empowered to prosecute and convict suspected perpetrators of crimes, however they are under resourced and receive little training. As a result, most cases are poorly handled and rarely result in a conviction. The vast majority of cases involving crimes against people with albinism, in particular murder, fail to go before a court due to a lack of funds and legal aid support for suspected perpetrators.

Even where cases have been brought to court, the perpetrators have often been released due to flawed investigations and a lack of relevant admissible evidence.

“The only way to stop these killings is by ensuring that existing laws are applied effectively and that there is efficient prosecution and coordination across the authorities.

“This rise in flagrant attacks against people with albinism shows that confidence is growing among criminal gangs that they will not get caught. They are taking advantage of Malawi’s failing criminal justice system. The authorities must take decisive measures to end these attacks once and for all.”

You can sign the Amnesty petition to help stop the ritual murders of people with albinism here.