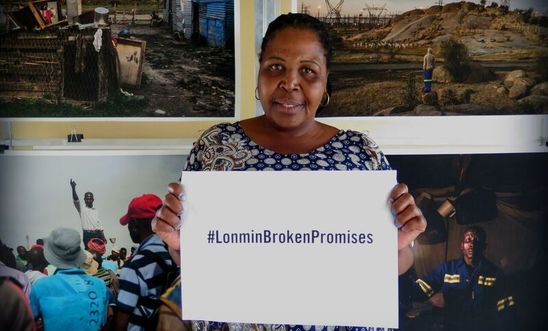 Shareholders of the UK-based platinum mining giant Lonmin Plc must ask what steps the company is taking to improve the appalling conditions in which it houses its workers, and which contributed to a labour dispute that left 34 striking miners dead in 2012, Amnesty International said today ahead of Lonmin’s Annual General Meeting (AGM) on 26 January in London.

The organisation has documented how Lonmin’s workers at its platinum mine in Marikana, South Africa, are still living in squalor in spite of legally binding commitments made by the company to build 5,500 new houses more than a decade ago.

“Lonmin, one of the world’s biggest platinum producers, received a resounding wake-up call when a labour dispute escalated and resulted in the police killing 34 striking mine workers at its Marikana site in 2012. It is astoundingly reckless that it continues to fail to live up to its promises to ensure decent living conditions for its workers,” said Deprose Muchena, Amnesty International’s Regional Director for Southern Africa.

“This is the moment for Lonmin’s shareholders to ask tough questions about the company’s behaviour – and legal commitments – and encourage them to correct their past mistakes.”

The AGM will be Lonmin’s fifth since the killings of mineworkers on 16 August 2012 by members of the South African Police Service after a wage dispute. It will bring together the company’s shareholders and investors.

Lonmin was incorporated in the United Kingdom in 1909. The company’s flagship operation is in South Africa’s North West Province in Marikana. It accounts for 95% of Lonmin’s output.

On 16 August 2012 the South Africa Police Service (SAPS) fatally shot 34 Lonmin employees who had been engaged in strike and protest action over pay and conditions at the Marikana mine. More than 70 others sustained serious injuries. Ten other men died in the days leading up to the killings.