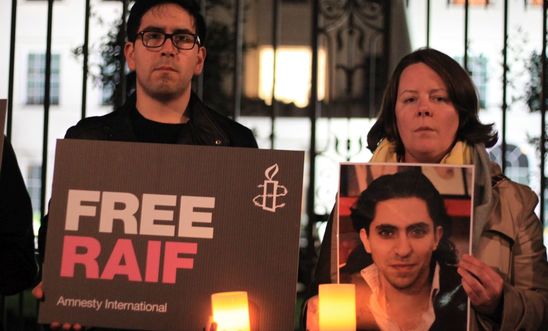 English PEN, along with Amnesty International and Reporters Without Borders, will stage a lunchtime vigil tomorrow (1-2pm) at the Saudi Arabia Embassy in London for the jailed Saudi Arabian blogger Raif Badawi, to mark three years since he was given 50 lashes.

Mr Badawi, a 34-year-old father-of-three who was detained more than five years ago, has been sentenced to ten years in jail and to be flogged 1,000 times for setting up a website focused on social and political debate in the country.

After Badawi was given his first batch of 50 lashes in a public square in the city of Jeddah on 9 January 2015, an international outcry appears to have led to the indefinite postponement of further floggings being carried out.

The blogger’s wife Ensaf Haidar, who lives in Canada, has led a high-profile campaign calling for her husband’s release. However, Badawi remains behind bars in Saudi Arabia.

Amnesty has long considered Raif Badawi a prisoner of conscience and has been critical of the UK Government for failing to speak out strongly about his case.

Amnesty is also raising the plight of Badawi’s lawyer, Waleed Abu al-Khair, who has also been jailed - for 15 years - on various spurious charges, including “disobeying the ruler and seeking to remove his legitimacy”.

Where: in front of the Saudi Arabia Embassy, Curzon Street, London WIJ (Mayfair)

(Note: this is not the actual street address of the embassy, but the gated entrance-way opposite the Curzon Mayfair cinema)