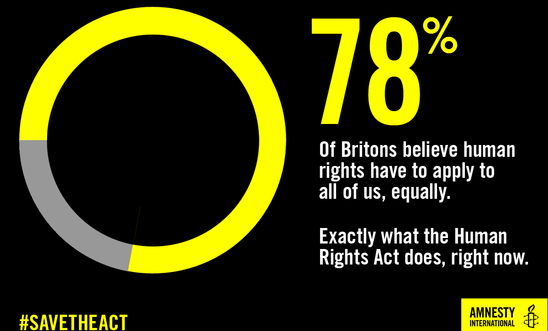 “The message from the British people is clear; leave the Human Rights Act alone” – Kate Allen

A new ComRes poll commissioned by Amnesty International has found that there is little appetite to repeal the Human Rights Act among the British public, and that the vast majority of Brits (78%) believe rights have to apply to everyone equally, in order to be effective at all.

Not a priority for the public

The polling, commissioned ahead of a government consultation on replacing the Human Rights Act, found that repeal of the Act is not seen by the British public as something which should be a priority for the government over the next few years when compared to other issues. Only 3% of British adults said it should be the most important priority for the government, with just 11% ranking repealing the Act within their top three priority issues for government.

This lack of desire to see changes in human rights protections in the UK, apparently chimes with the government’s own research findings. At this year’s Conservative party conference, it was revealed that the party’s own election strategist Lynton Crosby had ruled the issue should be given a low billing in the election campaign after their research found that just 16% of people identified human rights changes as a priority.

No clear call for specific rights to be removed

Meanwhile, any proposals which would reduce rights, and limit who is entitled to them, are clearly at odds with public views.

Almost half of GB adults (46%) would not want to remove any of the rights currently in the Human Rights Act from a new bill of rights, with less than 9% of adults selecting any one of those specific protections to be removed from a future bill with the exception of the ruling out of the death penalty (16%).

Support for universality of rights

There is strong support for the critical principle of universality of rights, with the vast majority of Britons agreeing that rights, laws and protections must apply to everyone equally in order to be effective (78%). Further to this, most British people agree that governments should not be able to choose which rights they enforce (67%).

“The government should abandon its ill-advised plans to repeal the Human Rights Act.

“There’s simply no appetite for their proposals among the British public.

“The British people clearly want the government to get on with their proper business of the day-to-day running of the country, and abandon these destructive plans.

“It’s quite right that it shouldn’t be up to governments to pick and choose which rights we are entitled to and select who they deem worthy of them. It took ordinary people a very long time to claim these rights and we mustn’t let politicians take them away with the stroke of a pen.

“It’s great to have it confirmed that British people think that rights and protections must apply to everyone equally in order to work at all. That includes people whose beliefs and actions we might profoundly disagree with, and it’s all the more important we stick to our enduring principles in challenging times.

“This is no time for the British government to set about dismantling and undermining human rights protections. Reducing rights anywhere, endangers rights everywhere. How can we ask other countries, like Saudi Arabia, China or Russia, to uphold human rights, if we are busy tearing up the rule book at home?

“The government has said it wants to consult on its proposals, and we have done their job for them here. The message from the British people is clear; leave the Human Rights Act alone.”

In addition, nearly one third of people (29%) disagree that the Human Rights Act has been fairly represented in the British press, while two in five say that changing human rights in the UK, would have a negative impact on the UK’s ability to promote human rights internationally.

ComRes interviewed 2,051 British adults online between the 2 and 4 October 2015. Data were weighted to be representative of all British adults aged 18+. ComRes is a member of the British Polling Council and abides by its rules. Full data tables are available at www.ComRes.co.uk&nbsp;