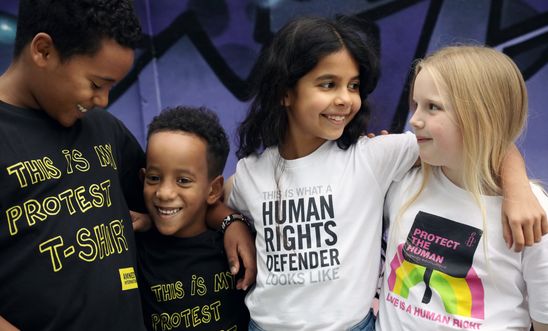 Amnesty International and Everpress have teamed up to launch ‘Leaders of Today’, a new range of limited-edition children’s protest T-shirts to celebrate the global wave of youth activism and mark the 30th anniversary of the UN Convention on the Rights of the Child on 20 November 2019.

The one-off collection includes four classic Amnesty slogan T-shirts in children’s sizes and a special new design by 15-year-olds Ailis and Lois from Greater Manchester. The teenagers won Amnesty’s T-shirt slogan competition last month when children from across the UK were invited to put forward their best slogan ideas to be judged by a panel of Amnesty experts. The winning entry by Ailis and Lois says: “This is my protest T-shirt”.

“I wanted a slogan that would invite people to ask me why I was wearing it. The words on the shirt can be used to spark many conversations and to invite discussion about topics that are important.”

The T-shirts are available to purchase online until Monday 29 November – with 100% of the profits going to Amnesty. Each T-shirt will retail at £20.

The ‘Leaders of Today’ T-shirt project marks the 30th anniversary of the UN Convention on the Rights of the Child. The landmark document sets out the civil, political, economic, social and cultural rights that all children everywhere are entitled to. On this important anniversary, Amnesty will be working to empower children and young people everywhere to realise their own rights and speak out in support of the rights of all children.

“Children around the world are speaking up for what they believe in and care about. From the school strikes for climate to the student protests to end gun violence, they are fighting for their rights - it’s time for the world to listen and act.

“Every child has the right to express their views on all matters affecting them, and to have their opinions and feelings considered and taken seriously."

UN Convention on the Rights of the Child

The UN Convention on the Rights of the Child sets out the human rights of every person under the age of 18 and is the most complete statement on children’s rights treaty in history.

Last month (23 October) sixteen children - including Greta Thunberg – from 12 countries around the world used the Convention to present an official complaint to the United Nations Committee on the Rights of the Child to protest lack of government action on the climate crisis.

However, the UK still has not ratified Optional Protocol 3 of the Convention, which gives children the ability to use the document to complain to the Committee on the Rights of the Child when their rights are violated. Ratifying the Convention isis essential to holding the UK to account for child rights violations from the rise in knife crime, to the climate crisis, to Special Educational Needs and Disabilities funding cuts.

In September this year Amnesty’s Children’s Human Rights Network handed in a 7,000-strong petition to the Department for Education calling on the UK Government to ratify Optional Protocol 3 of the UN Convention on the Rights of the Child.