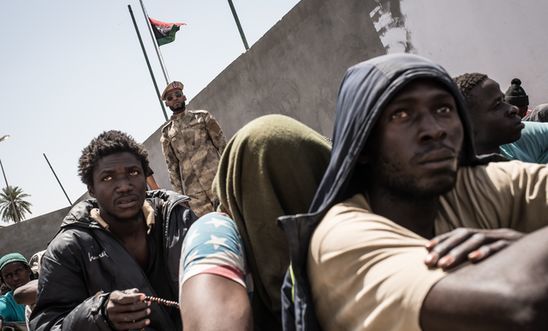 An attack by fighters who opened fire on refugees and migrants at a detention centre on the outskirts of Tripoli highlights the urgent need to ensure civilians are being protected during ongoing fighting in the country, said Amnesty International after speaking to eyewitnesses.

Yesterday, armed men raided the Qasr Ben Ghashir detention centre, south of Tripoli, shooting and wounding a number of the people held there. According to the UN Refugee Agency, at least 12 people were hospitalised as a result of their injuries.

Amnesty is calling for an urgent investigation into the attack.

Video footage seen by Amnesty shows distressed people in the aftermath of the shooting, some of them screaming. In one of the videos, three people are shown with apparent gunshot wounds - another shows several of the injured lying on the floor, bandages soaked with blood.

One of the people detained at the detention centre described their desperate situation to Amnesty and made a plea for emergency assistance from humanitarian organisations:

“We are more than 600 people here. Still now we are at risk. We want evacuation directly [out of] Libya. Please help us, help us.”

The reasons behind the attack remain unclear and the identity of the perpetrators is yet to be established.

Amnesty spoke to one witness who said he recognised the logo of the self-proclaimed Libyan National Army on a vehicle used by the attackers. However, another detainee told Amnesty it was unclear who the attackers were. He said the armed men entered the detention centre, confiscated people’s phones and then began shooting. The injured were taken away in ambulances last night, he said. He told Amnesty this morning that those detained still felt unsafe and fear further attacks. He also said that no humanitarian organisations had been to the centre since the attack.

Libya’s Government of National Accord has issued a statement condemning the attack, accusing forces loyal to General Khalifa Haftar of carrying it out. It also said preparations were underway to transfer the migrants to areas away from the fighting. Meanwhile, UNHCR has announced that efforts are underway to urgently relocate the approximately 890 refugees and migrants held at Qasr Ben Ghashir to safer areas.

Overall, UNHCR estimates that there are at least 3,600 refugees and migrants trapped in detention centres in conflict-affected areas around Tripoli .To date, UNHCR has moved 541 vulnerable refugees from detention centres at Ain Zara, Qasr Ben Ghashir, Abu Salim and Janzour to its Gathering and Departure Facility in central Tripoli.

Since the Libyan National Army launched its Tripoli offensive on 4 April, there have been at least 90 civilian casualties, including 21 civilian deaths, according to UN Organisation for the Coordination of Humanitarian Affairs.

“This incident demonstrates the urgent need for all refugees and migrants to be immediately released from these horrific detention centres where they are held arbitrarily in inhuman conditions and routinely subjected to abuse.

“Direct attacks on civilians are serious violations of international humanitarian law and constitute war crimes. There can be no justification for targeting defenceless civilians. These refugees and migrants should not even be detained in the first place.

“All parties to the conflict must protect migrants and refugees from further attacks and ensure that those injured urgently receive adequate medical care. The authorities detaining them and all sides must allow humanitarian organisations to access the facility as a matter of urgency, and release them to a place of safety.

“This horrific attack also makes patently clear the urgency for EU member states to ensure safe routes out of Libya for refugees and migrants trapped in the country.”