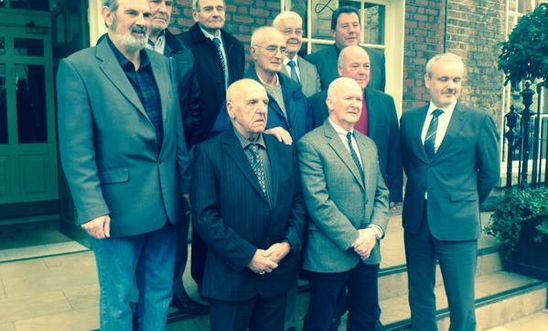 ‘A request to the European Court must be lodged within the next two weeks. The clock is ticking’ - Colm O’Gorman

Allegations that the UK government sanctioned the use of torture and ill-treatment in Northern Ireland in the 1970s should be re-examined by the European Court of Human Rights and subject to a new independent investigation.

That is the call from Amnesty International, which is urging the Irish government to request a re-opening of the landmark 1978 Ireland v UK judgment involving the torture and ill-treatment of the 14 so-called ‘hooded men’, who were interned in Northern Ireland in 1971.

The call was supported by the ‘hooded men’ at an Amnesty press conference in Dublin this morning.

In 1971, Ireland took the first inter-state case to come before the European Court of Human Rights, alleging that the UK had breached the European Convention on Human Rights (ECHR) through the torture and ill-treatment of these men by members of the British army and Royal Ulster Constabulary (RUC). The use of what Ireland - and Amnesty - considered to be torture during internment was central to what became known as the “hooded men” case.

Amnesty’s new call follows archival material uncovered by an RTÉ television programme, The Torture Files, broadcast in June, which revealed that the UK government withheld crucial evidence from the European Court during the hearing. The withheld evidence, Amnesty believes, could possibly have led to a different finding by the European Court in 1978, which ruled that the ‘five techniques’ of interrogation inflicted on the men constituted inhuman and degrading treatment in breach of Article 3 of the ECHR, but not torture.

The five techniques were hooding, stress positions, white noise, sleep deprivation and deprivation of food and water, and were combined with physical assaults and death threats to the men.

The 4 June RTÉ programme showed that files uncovered from the UK National Archives reveal that the British government knew that its core argument, that the effects of techniques used on the “hooded men” were not severe or long-lasting, was untrue. In fact it shows that the government appears to have known at the time of the severe and long-term psychological and physical effects of these ‘five techniques’, and in fact considered them as ‘torture’.

The RTÉ programme revealed previously unseen documents which showed that the UK authorities - including senior government ministers - sanctioned the use of the ‘five techniques’ in Northern Ireland, which they had also denied before the European Court.

“These men and their families have a right to truth and justice. We recognise the diplomatic challenges in Ireland’s seeking to have this case reopened. However, we hope the Irish government today shows the same determination of its predecessors in 1971 who took a bold and unprecedented step to uphold the rule of law and expose human rights violations.

“The Irish state argued then that the UK’s actions amounted to torture - we call on it to do so again now. That means that a request to the European Court to look at this new information must be lodged within the next two weeks. The clock is ticking.

“As well as a re-opening of the Ireland v UK case, the UK has a long overdue responsibility to establish an independent investigation into the torture of these men, and to hold to account those responsible. That has never happened. That is unacceptable, both for the men, their surviving family members, and society more generally.

“That responsibility lies squarely with the UK government. We call on Ireland to use its good offices to ensure that the UK carries out such a human rights compliant investigation.

“This case underscores the need for a comprehensive means of dealing with the past in Northern Ireland, and the need for all parties to the conflict to come clean about their role in human rights violations and abuses.”

The UK succeeded in persuading the European Court to absolve it of the “special stigma” of a finding of torture by not disclosing relevant evidence and by taking a position that was directly contradicted by its own, internal advice.

The Ireland v UK case has had far-reaching consequences. The reasoning in the case was quoted in the now infamous Torture Memos by the George W Bush administration to try to justify prisoner abuse during the so-called ‘war on terror’ as less than torture.

Last month, Amnesty wrote to the Irish Taoiseach, Enda Kenny to press for a reopening of the case. The Irish government can lodge an application with the European Court and has until 3 December - six months from the date the new information became known - to lodge a request with the Court for a revision of the judgment.

Amnesty also wrote to David Cameron, urging the UK government to establish an independent investigation into the allegations and to bring those responsible to justice. There has never been an investigation compliant with Article 3 of the ECHR giving rise to prosecution of any of the state agents involved in sanctioning or carrying out the violations. In addition, Amnesty is urging the UK government to set up a new process in Northern Ireland to investigate all human rights violations and abuses - whether committed by the security forces or armed paramilitary groups - during the conflict, including the systematic use of torture and other ill-treatment.

"Time does not heal all wounds, if justice is not done.

“I led an Amnesty delegation to Belfast over forty years ago to investigate allegations we had received of brutal interrogation methods combined with measures of ‘sensory deprivation’. It was obvious to us that these were very grave human rights violations, indeed amounting to torture.

“I was deeply disappointed when the European Court of Human Rights concluded that the ill-treatment of detainees in Northern Ireland under emergency powers in the early 1970s did not amount to torture. Similar methods have since then been used against suspects not least during the US-led ‘war on terror’.

“The allegation that the UK government misled the Strasbourg Court in the ‘hooded men’ case must be taken very seriously. If substantiated, this was a grave, additional injustice to the victims, and allowed impunity then and for those who have used such methods in other situations in the last four decades.

“It should be in the interest of the UK government, as a signatory of the UN Convention against Torture and the European Convention on Human Rights, to ensure that facts be clarified in this critical case and remedial action be taken.”