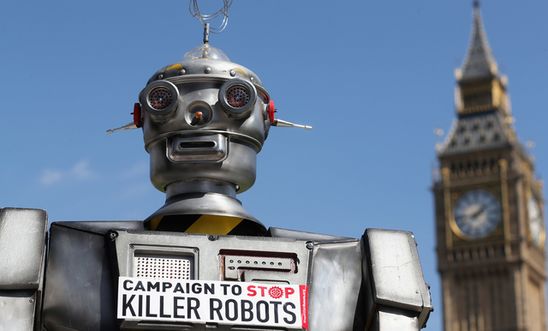 More than three in five people across 26 countries oppose the development of autonomous weapons that could select and kill targets without human intervention, according to a new Campaign to Stop Killer Robots poll published today.

The Ipsos MORI poll found that in the 26 countries surveyed:

*More than three in every five people (61%) oppose the development of lethal autonomous weapons systems.

The poll also shows that opposition to killer robots is growing - a near-identical survey in 23 countries in January 2017 found that 56% of respondents were opposed to the weapons systems.

The Campaign to Stop Killer Robots, a global coalition of NGOs which includes Amnesty International, is calling for a total ban on the development, production and use of fully-autonomous weapon systems in light of the serious human rights, humanitarian and security risks they pose. The use of autonomous weapons without meaningful and effective human control would undermine the right to life and other human rights, and create an accountability gap if they are able to make their own determinations about the use of lethal force.

Currently, 28 countries support a ban on fully autonomous weapons and Austria, Brazil and Chile have formally proposed the urgent negotiation of “a legally-binding instrument to ensure meaningful human control over the critical functions” of weapons systems. However, a minority of countries at the recent annual meeting of the Convention on Conventional Weapons used procedural rules to thwart meaningful diplomatic progress on the issue. Russia, Israel, South Korea and the USA indicated at the meeting that they would not support negotiations for a new treaty.

“This poll shows that the states blocking a ban on killer robots are totally out of step with public opinion.

“We still have time to halt the development and proliferation of fully-autonomous weapons, but we won’t have that luxury for long.”

The survey by Ipsos MORI was commissioned by the Campaign to Stop Killer Robots and conducted in December 2018. The sample size was 500-1,000 people in each country.

In October, the UK Government said it “continue[s] to oppose a legal instrument or ban that would prejudice legitimate technological advances”, though it has previously claimed it has no intention of developing or using fully-autonomous weapons.

UK companies are known to be working on the development of artificial intelligence for use in conflict and increasing autonomy in weapons systems, with the UK Government saying it remains committed to the principle that there will always be a human in control of the lethal technology it develops or uses.

“In a world already awash with arms, we need to act quickly to prevent the unleashing of this nightmarish new wave of weapons.

“If the UK doesn’t support a ban, then it’s leaving the door wide open to the entry of killer robots onto the battlefield and on our streets within a few short years.

“In the not-too-distant future, it could be that British citizens are being killed by fully-autonomous weapons operated by belligerent countries or rogue non-state actors.”