Jordan: women jailed for 'absence' from home, and sex or pregnancy outside marriage - new report 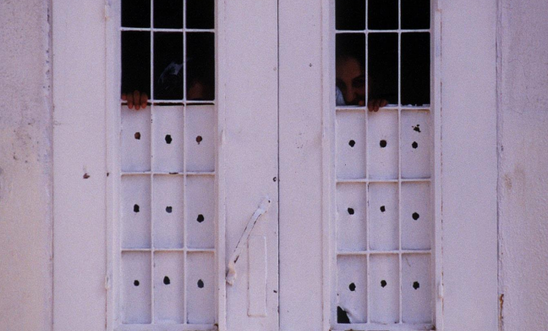 Dozens of women jailed for months at a time, with male guardians and hospitals reporting them to authorities

‘I went to hospital and gave birth. The hospital asked if I was married and I said no, so then they called the police’ - Ola*

Amnesty International is calling on the Jordanian authorities to stop their collusion with an abusive male “guardianship” system used to control women’s lives and put some behind bars “for their own protection”.

In a new 64-page report - Imprisoned women, stolen children: policing sex, marriage and pregnancy in Jordan - Amnesty shows how women in Jordan accused of leaving home without permission (“absence”) or of having sex outside marriage are being jailed for prolonged periods.

In February this year, Amnesty visited Juweideh prison, the main women’s prison in Jordan, and interviewed 22 women jailed without charge or trial for “absence” or after being accused of sex outside marriage (“zina”). Most said they had been imprisoned for months and were waiting for a male family member to “bail” them out. As recently as last month, informed sources confirmed to Amnesty that at least 30 women remain detained in Juweideh for “absence” and sex outside marriage.

Almost all of these women described fleeing abusive domestic environments or said they had run away after a guardian blocked their choice of marriage partner. Under Jordanian law, women below the age of 30 require the consent of their male guardian (normally their father, brother or uncle) to get married.

Amnesty’s report shows how provincial governors in Jordan misuse a draconian piece of legislation - the Crime Prevention Law - to administratively detain scores of women at any one time.

“I was stopped on the street in Amman and the police asked me for my ID. I didn’t have it, so they said I had to come to their station, but when I got there they found a warrant for my arrest because I was ‘absent’. The two police officers there beat me … I was taken to the governor’s deputy in [location withheld]. He said I would go to Juweideh prison until my father bails me out.”

Meanwhile, four other women told Amnesty that hospital staff had called police because they were pregnant outside of marriage. *Ola, in her 20, explained:

“I got pregnant and tried to marry the man. But the marriage wasn’t approved because I have no guardian. My parents are dead, and I just have younger sisters, no brothers … I went to hospital and gave birth. The hospital asked if I was married and I said no, so then they called the police. That’s how I ended up here [in jail].”

Two unmarried pregnant women separately said they were being held in administrative detention until they gave birth so the authorities could collect DNA evidence from their baby. This was because the alleged father wanted to exonerate himself from sex outside marriage accusations.

The Prime Minister’s office in Jordan told Amnesty that 85 women have so far been administratively detained for sex outside marriage in 2019, but denied women were ever imprisoned for “absence” - unless they were also suspected of an additional offence. However, Amnesty’s research and work by Jordanian lawyers shows that governors do order the detention of women for “absence”, often based solely on the request of their guardian. Meanwhile, the PM’s office also told Amnesty that there are in total 149 women in administrative detention, and that 1,259 women had been released from administrative detention over the first six months of 2019.

Ministry of Interior officials told Amnesty earlier this year that governors detain women for “absence” and sex outside marriage for their own protection, as their family members may want to kill them.

“The Jordanian government should urgently address these shameful violations that national women’s organisations have been battling for decades, starting with the zealous use of detention powers by provincial governors, and the discriminatory male guardianship system that allows adult women to be arrested for leaving home without permission.

“Sadly, we have documented several cases of unmarried women who became pregnant as a result of rape, who were then imprisoned, forcibly separated from their child or denied birth registration.

“Instead of actively contributing to the stigma attached to children born outside of marriage, the authorities must work to eliminate it and help unmarried women who want to bring up their children.

“What is needed now is a comprehensive review of laws and policies to ensure women are trusted to make free decisions about their sexual and reproductive lives, rather than being criminalised, punished and marginalised.”

Children taken away from unmarried mothers

Women who are pregnant outside marriage face the added risk that their child will be forcibly taken into state care. While the Prime Minister’s office told Amnesty that a child is only removed where he or she is assessed to be at-risk, women’s rights activists and lawyers told Amnesty the opposite: that “family protection” police take the children of unmarried women to Ministry of Social Development care homes as a matter of institutional practice, in the absence of individualised assessments.

Five women who gave birth while unmarried told Amnesty that their newborn children had been taken away by police without their consent. A Ministry of Social Development-run kindergarten in Juweideh prison that allows women to keep young children with them excludes “illegal babies”.

At best, unmarried women can seek to be reunited with their children as a foster parent.

Two migrant domestic workers told researchers they gave birth at home to prevent their child being taken away from them. An NGO told Amnesty they knew of 20 such cases. Unmarried women struggle to register their children’s birth and gain legal identity for them. A woman who married an abusive partner (who had raped her) in order to register her children, said she did so on the advice of an NGO given her lack of other options. *Amy told Amnesty:

“I didn’t want to marry [my husband] but I was advised to do so. I am worried one day he will beat me to death. But I have no choice, I must stay with him. The lawyer said I had to marry him so I can register the [children].”

Unmarried women detained for “absence” told Amnesty that they were taken by police to do a “virginity test”. This is an invasive examination performed under the unscientific belief that it can determine if the woman has had vaginal intercourse. It violates the prohibition on torture and other ill-treatment under international law. *Hanan, aged around 20, told Amnesty she had fled her abusive home on three occasions with her sister:

“Every time we ran away, when we were arrested the police would take us to the hospital and my father would insist that they do the virginity tests on [us]. We agreed to it each time, as we knew we had to show our father that we were virgins. ‘Family protection’ [police] made it very clear anyway, if our father asks us to do the test, we have to do it. It is his right.”

Likewise, other women described being ordered to submit to the tests by police or family members. Even in the absence of obvious forms of coercion, women who are in detention cannot give free consent.

“The use of ‘virginity tests’ by the police in Jordan reinforces a discriminatory idea that male family members have a right to monitor and control women’s sexuality. Such unlawful practices must end in all circumstances.”

Under the Jordanian Penal Code, sex outside of marriage - including pre-marital and extra-marital sex (adultery) - is criminalised. Women in particular are at risk of being prosecuted for this “crime”, which carries a prison sentence of between one and three years. While both men and women may be prosecuted if their spouse complains to the authorities, a woman can also be prosecuted following a complaint by her male guardian, giving male family members another tool to punish and control women.

In July last year, a shelter (“Dar Amneh”, meaning Safety House) for women at risk of being killed by family members was opened by Jordan’s Ministry of Social Development. As of mid-September this year, the facility had hosted 75 women. Civil society organisations have credited Dar Amneh with reducing the numbers of women in administrative detention. However, the opening of Dar Amneh has not ended the practice of women being detained for “absence” and sex outside marriage in Jordan.

“The opening of Dar Amneh is a positive step that appears to have resulted in less women being detained in so-called ‘protective custody’ and shows political will to protect women’s rights.”

Note: names have been changed (indicated by an asterisk) to protect the identity of those concerned.