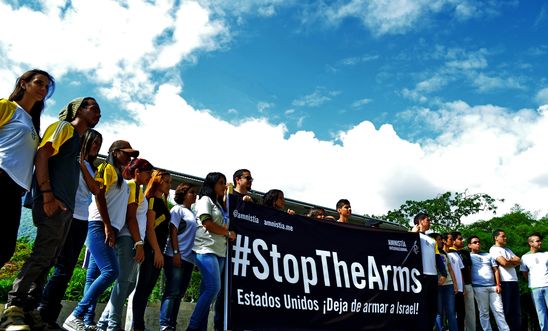 Since protests began on 30 March over 5,500 people have been injured with more than 1,700 of injuries caused by live ammunition

“Time for symbolic statements of condemnation is now over. The international community must stop the delivery of arms to Israel” - Magdalena Mughrabi

Israel is carrying out a murderous assault against protesting Palestinians as its armed forces continue to kill and maim demonstrators who pose no imminent threat to them, according to research by Amnesty International.

As the ‘Great March of Return’ protests continue in the Gaza Strip today (27 April), Amnesty has renewed its call on governments worldwide to impose a comprehensive arms embargo on the country following its disproportionate response to mass demonstrations along the fence that separates the Gaza Strip from Israel.

The Israeli military has killed 35 Palestinians and injured more than 5,500 others – some with what appear to be deliberately inflicted life-changing injuries – during the weekly Friday protests that began on 30 March.

“For four weeks the world has watched in horror as Israeli snipers and other soldiers, in full-protective gear and behind the fence, have attacked Palestinian protesters with live ammunition and tear gas. Despite wide international condemnation, the Israeli army has not reversed its illegal orders to shoot unarmed protesters.

“The time for symbolic statements of condemnation is now over. The international community must act concretely and stop the delivery of arms and military equipment to Israel.

“A failure to do so will continue to fuel serious human rights abuses against thousands of men, women and children suffering the consequences of life under Israel’s cruel blockade of Gaza. These people are merely protesting their unbearable conditions and demanding the right to return to their homes and towns in what is now Israel.”

The USA is by far Israel’s main supplier of military equipment and technology, with a commitment to provide $38 billion in military aid over the next 10 years. Other countries, including EU member states such as France, Germany, the UK and Italy, have also licensed large volumes of military equipment for Israel.

Protesters shot from behind

In most of the fatal cases analysed by Amnesty, some victims were shot from behind and in the upper body, including the head and the chest. Eyewitness testimonies, video and photographic evidence suggest that many were deliberately killed or injured while posing no immediate threat to the Israeli soldiers.

Among the victims is 23-year-old football player Mohammad Khalil Obeid, who was shot in both knees as he filmed himself with his back towards the border fence at a protest east of al-Breij Camp on 30 March.

The video, published on social media, shows the moment he was shot. In the footage, he appears to be standing in an isolated area, far from the fence, and not seeming to pose any threat to the lives of Israeli soldiers. He is currently in need of a knee replacement operation to be able to walk again.

“As a Palestinian player my life has been destroyed... I was dreaming of playing football abroad, and to raise the Palestinian flag abroad [to show] that we are not terrorists.

“We wanted to convey our message to all organisations, countries and heads of states so that they see what is happening to us, because no one would accept this anywhere in the world.”

Injuries not seen since the war

Doctors at the European and Shifa hospitals in Gaza City told Amnesty that many of the serious injuries they have witnessed have been to the lower limbs, including the knees, which are typical of war wounds that they have not observed since the 2014 Gaza conflict.

Many have suffered extreme bone and tissue damage, as well as large exit wounds measuring between 10 and 15mm, and will likely face further complications, infections and some form of physical disability - such as paralysis or amputation. Reports of the high number of injuries to the knees, which increase the probability of bullet fragmentation, are particularly disturbing. If true, they would suggest that the Israeli army is intentionally intending to inflict life-changing injuries.

Doctors also said that they have observed another type of devastating injury characterised by large internal cavities, plastic left inside the body but no exit wounds.

According to military experts as well as a forensic pathologist who reviewed photographs of injuries obtained by Amnesty, many of the wounds observed by doctors in Gaza are consistent with those caused by high-velocity Israeli-manufactured Tavor rifles using 5.56mm military ammunition. Other wounds bear the hallmarks of US-manufactured M24 Remington sniper rifles shooting 7.62mm hunting ammunition, which expand and mushroom inside the body.

According to a recent statement by Médecins Sans Frontières, half of the more than 500 patients admitted to its clinics were treated for injuries “where the bullet has literally destroyed tissue after having pulverised the bone”. This information has been confirmed by humanitarian NGOs as well as testimonies collected from doctors by Palestinian human rights groups in Gaza.

“The nature of these injuries shows that Israeli soldiers are using high-velocity military weapons designed to cause maximum harm to Palestinian protesters that do not pose imminent threat to them. These apparently deliberate attempts to kill and maim are deeply disturbing, not to mention completely illegal. Some of these cases appear to amount to willful killing, a grave breach of the Geneva Conventions and a war crime.

“Unless Israel ensures effective and independent investigations resulting in criminal prosecutions of those responsible, the International Criminal Court must open a formal investigation into these killings and serious injuries as possible war crimes and ensure that perpetrators are brought to justice.”

According to the Ministry of Health in Gaza, since the beginning of the protests, the total number of injured is estimated at 5,511 – 592 children, 192 women and 4,727 men – with 1,738 injuries from live ammunition. Approximately half of those admitted to hospitals suffered injuries to the legs and the knees, while 225 sustained injuries to the neck and head, 142 others were shot in the abdomen and pelvis, and 115 were injured in the chest and the back. So far, the injuries have resulted in 18 amputations.

Four children aged between 14 and 17 are among those killed due to injuries sustained during protests. Two journalists have also been shot dead, despite both wearing protective vests that clearly identified them as members of the press, while several others have been injured.

Gaza’s hospitals have struggled to cope with the large number of casualties due to shortages in medical supplies, electricity and fuel caused by the Israeli blockade and exacerbated by the intra-Palestinian divide. Meanwhile, Israel has been delaying or refusing the transfer of some patients in need of urgent specialised medical treatment available in other parts of the Occupied Palestinian Territories due to their participation in protests.

In one case documented by Amnesty, 20-year-old journalist Yousef al-Kronz had his left leg amputated after the Israeli authorities denied him permission to travel to Ramallah in the occupied West Bank for urgent medical treatment. He was eventually allowed to leave for an operation to save his other leg following legal intervention by human rights groups.

Paramedics in Gaza have told Amnesty of difficulties evacuating injured protesters due to the Israeli army firing tear gas canisters at them and near field hospitals.

The organisers of the “Great March of Return” have repeatedly stated that the protests are intended to be peaceful, and they have largely involved sit-ins, concerts, sports games, speeches and other peaceful activities.

Despite this, the Israeli army reinforced its forces – deploying tanks, military vehicles, soldiers and snipers along the Gaza fence – and gave orders to shoot anyone within several hundred metres of the fence.

While there are some protesters who have attempted to approach the fence, thrown stones in the direction of Israeli soldiers or burnt tyres, social media videos and eyewitness testimonies show that Israeli soldiers have shot at unarmed protesters, bystanders, journalists and medical staff approximately 150-400m from the fence, where they did not pose any threat.

In a petition requesting that the Israeli Supreme Court order the Israeli army to stop using live ammunition to disperse protests, human rights groups Adalah and Al Mezan provided evidence of 12 videos showing unarmed protesters, including women and children, being shot by the Israeli army. In some cases, people were shot while waving the Palestinian flag or running away from the fence.

Video footage widely circulated on social media shows Abd Al-Fattah Abd Al-Nabi, aged 19, being shot on 30 March as he was running away from the fence while holding a tyre, with his back turned to Israeli soldiers. He was shot in the back of the head and died. On Friday 20 April, 14-year-old Mohammad Ayyoub was also killed by a gunshot wound to the back of the head.

Over the last 11 years, civilians in the Gaza Strip have suffered the devastating consequences of Israel’s illegal blockade in addition to three wars. As a result, Gaza’s economy has sharply declined, leaving its population almost entirely dependent on international aid. Gaza now has one of the highest unemployment rates in the world at 44%. Four years since the 2014 conflict, some 22,000 people remain displaced.

In January 2015, the Office of the Prosecutor of the International Criminal Court opened a preliminary examination of situation in the Occupied Palestinian Territories, specifically looking into allegations of crimes committed since 13 June 2014.

Amnesty has been calling on all states to impose a comprehensive arms embargo on Israel, as well as on Palestinian armed groups, with the aim of preventing violations of international humanitarian and human rights law by all sides.

On 30 March a six-week campaign composed of a series of protests was launched at the Gaza Strip, near the Gaza-Israel border. Called by Palestinian organisers the "Great March of Return".

Since then, in addition to the protesters, seven other Palestinians have been killed by Israeli air strikes, artillery fire or live ammunition, including a farmer who was harvesting his land near the fence, and six members of Palestinian armed groups.