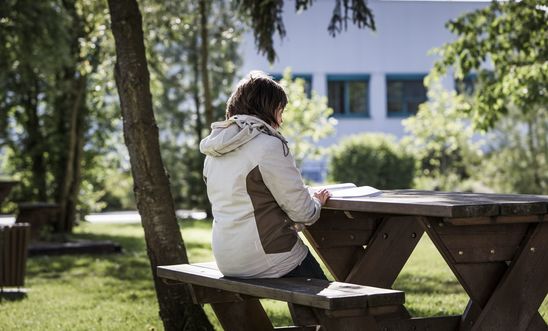 Spainish woman gets no treatment in Ireland when the foetus she is carrying has no heart beat. She goes back to Spain for necess © Amnesty International / Eugene Langan

“I would fear for my life to have another child in Ireland.” Rebecca H.

Ireland must change the law to allow women and girls access to safe, legal abortions

At least 10 women and girls living in the Republic of Ireland travel to England for an abortion every day because of Ireland's extremely restrictive abortion laws, said Amnesty International as it published a new report today (9 June).

In allowing an abortion to take place only if a woman's life is at risk, Ireland's abortion law is one of the most restrictive in the world, forcing at least 4,000 women and girls to travel outside the country every year at considerable physical, mental and financial cost.

Women who cannot travel are left without access to necessary health treatment, or risk criminal penalties if they undergo illegal abortions at home.

Amnesty’s new report, entitled She is not a criminal: The Impact of Ireland’s abortion law documents shocking cases of the Irish authorities denying women and girls necessary healthcare in order to prioritise the life of the foetus. This practice is shielded by an amendment to Ireland’s constitution added in 1983.

“The recent Marriage Equality referendum showed a country that prides itself on being an open and inclusive society, but all is not well in the Republic of Ireland.

“The human rights of women and girls are violated on a daily basis because of a constitution that treats them like child-bearing vessels.

“Women and girls who need abortions are treated like criminals, stigmatised and forced to travel abroad, taking a serious toll on their mental and physical health. The Irish state can no longer ignore this reality, and the appalling impact it is having on thousands of people every year.”

‘Fear for my life’

Amnesty’s report presents testimony from women who have undergone abortions abroad, some of whom suffered miscarriages but were forced to carry a dead or unviable foetus inside them for weeks in the futile hope they could get the health care they need in Ireland.

Róisín was forced to carry a dead foetus for weeks because doctors wanted to be absolutely sure there was no foetal heartbeat. She told Amnesty:  “I wouldn’t be inclined to trust services for women in this country at the moment.”

Lupe, who was carrying a foetus with no heartbeat for 14 weeks, told Amnesty she had to travel to her home country of Spain for proper medical treatment: “I didn’t feel safe at all…I was feeling really scared because it became clear to me, that if any complication was raised, these people would let me die.”

It is not just women seeking abortions who are denied access to healthcare by the focus on the foetus. Health staff refused Rebecca H., who was gravely ill, a C-section for fear that it would harm her foetus. Instead, they forced her to endure 36 hours of labour saying their job was “to look after the baby, the baby comes first”. She told Amnesty: “I would fear for my life to have another child in Ireland.”

Dr. Peter Boylan, an obstetrician, gynaecologist and former Master and Clinical Director of Ireland’s National Maternity Hospital told Amnesty about the legal and ethical tightrope that medical staff are forced to walk: “Under the [current law] we must wait until women become sick enough before we can intervene. How close to death do you have to be? There is no answer to that.”

One of the most restrictive abortion laws in the world

Ireland is one of the few countries in Europe that bans women from getting abortions even in cases of rape, severe or fatal foetal impairment or a risk to their health, which is their human right under international law (Andorra, Malta and San Marino being the other states).

Northern Ireland has similarly restrictive laws and earlier this year, Amnesty launched a report and campaign for access to abortion in Northern Ireland where an estimated 1,000 women a year travel to England for an abortion.

Amnesty is urging Ireland to change its law so that women and girls can have abortions in those cases, at the very least

“Ireland’s draconian laws have created a climate of fear where counsellors can be fined for telling women how to seek medical care, and as a result some women are avoiding doctors altogether.

Downloads
She is not a criminal - Amnesty International report