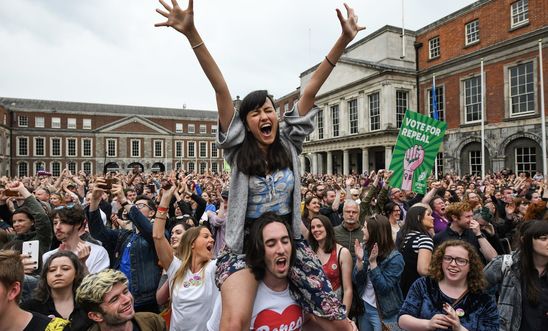 ‘Women have waited 35 years for this’ – Colm O’Gorman

Amnesty International has welcomed the passing of the bill to legalise abortion services in Ireland but warned that ‘significant flaws’ in the legislation give rise to serious concerns.

The Health (Regulation of Termination of Pregnancy) Bill 2018 passed all stages of the Oireachtas (Irish Parliament) yesterday and will now go to the President to sign it into law.

“We welcome the passage of this bill, and fully appreciate the importance of its enactment by year’s end so that abortion services can begin in January. Women have waited 35 years for this.

“We, and the government, want to avoid a situation where the law prevents pregnant people from accessing the healthcare they need or delaying their care. We don’t want women continuing to travel or accessing illegal abortion pills online. That is not what people voted for on 25 May.

“But as the law is currently drafted, we have some serious concerns that barriers to women accessing timely care remain. And there are some significant flaws. These include the potentially high and ambiguous threshold created by the language on ‘serious harm’ to a women’s health, the lack of provision of access in cases of pregnancies with severe rather than fatal foetal impairments, the mandatory waiting periods, and the continued criminalisation of health professionals.

Amnesty UK has been calling on the UK Government to urgently reform its dangerous and degrading abortion law so that women in Northern Ireland can enjoy the same levels of care, dignity and respect as those in the Republic of Ireland and the rest of the UK. A petition supporting the campaign has gathered almost 58,000 signatures.