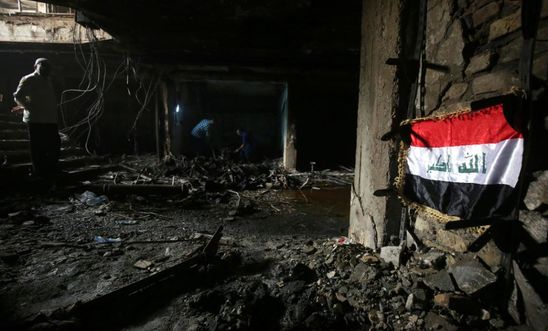 Amnesty International has criticised Iraq’s execution of five people following the suicide truck bombing in Baghdad at the weekend.

According to the Iraqi Ministry of Justice, five prisoners were executed yesterday, with the authorities saying that more executions would be carried out following Saturday night’s attack in the capital. The attack, which the Islamic State armed group said it carried out, reportedly killed at least 213 people and injured a further 200.

In a statement yesterday, the Ministry of Justice said it would “categorically reject” any international interference in its executions, adding it would not accept any human rights arguments against the death penalty. The ministry said that 3,000 people remained on death row, while more defendants were being sentenced to death.

At least 105 people have already been executed in Iraq this year, while Iraqi courts have also handed down more than 123 death sentences, mostly to those accused of acts of terrorism. On 29 June, Amnesty wrote to the Iraqi authorities asking them to halt all executions, establish an official moratorium on executions, commute all death sentences, and ensure that all retrials are in full compliance with international fair trial standards.

“Executions are not the solution and they do not address the root causes of crime.

“The government’s response marks a worrying surge in the use of the death penalty in the country’s counter-terrorism efforts.

“We call on Iraq to immediately halt all executions and establish an official moratorium on executions. The country cannot continue to use counter-terrorism to justify gross miscarriages of justice and the use of the death penalty.”

The criminal justice system remains critically flawed in Iraq. Trials, particularly of defendants facing charges under the anti-terrorism law, can be grossly unfair, with courts often admitting torture-tainted evidence, including when defendants recant their “confessions” in court.

Last year, the Iraqi cabinet proposed amendments to the country’s Code of Criminal Procedure aimed at speeding up the execution process. Before a death sentence can be carried out, currently the president of Iraq must ratify it. But if the amendment is passed, executions could be carried out without the president’s approval a month after being submitted for ratification. The cabinet’s proposal would also make it more difficult for defendants sentenced to death to seek a retrial.

Former President Jalal Talabani refused to ratify any death sentences, which led to a “backlog”. Last year, the new president, Fuad Ma’sum, came under significant pressure from MPs and the public to ratify death sentences following the Speicher massacre, in which at least 1,700 military cadets from Speicher military camp near Tikrit were killed after capture by ISIS fighters in June 2014. A special committee was set up in the presidency to manage the issue.