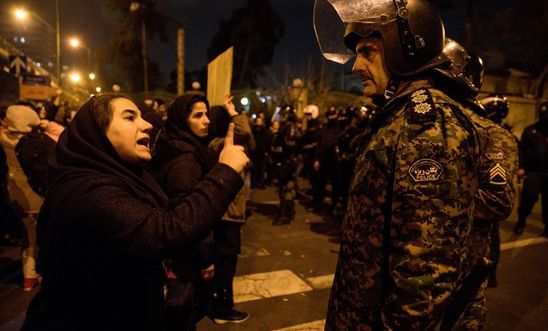 Scores arrested after protests at shooting down of Ukrainian passenger plane

‘The situation in Iran right now is even more painful than death. They are killing us slowly; they are torturing us to death’ - an eyewitness to protests in Tehran

Verified video footage, photographs and testimonies from victims and eyewitnesses obtained by Amnesty International show that Iranian security forces used unlawful force against peaceful protesters demonstrating after the authorities’ admission they had shot down a Ukrainian passenger plane last week.

The evidence shows that during Saturday and Sunday (11-12 January) the security forces used rubber bullets, tear gas and pepper spray to disperse protesters, as well as kicking and punching them, beating them with batons and carrying out arbitrary arrests.

Testimonies and photographs obtained by Amnesty also indicate that the security forces fired pointed pellets from airguns at peaceful protesters, causing bleeding and painful injuries. Several people required surgical treatment to remove the pellets, as well as for injuries consistent with rubber bullet use. Such pellets are used for hunting and are completely inappropriate for use in any policing situation.

One of the videos verified by Amnesty shows two women in Tehran lying injured and bleeding on the ground. In another video recorded nearby, a woman is seen lying in a pool of blood crying out in pain. People helping them in the videos are heard to say they have been shot. Another video shows a man with a bleeding head wound. Two x-rays obtained by Amnesty clearly show pellets lodged in the knee joint of one protester and the ankle of another. Amnesty has also verified images of security forces carrying shotguns.

One man from the city of Shiraz, in Fars province, who said he went to light a candle in solidarity with the plane crash victims on 12 January, said the security forces outnumbered the crowd and created a “terrifying and intimidating atmosphere to frighten people away”. He said, “They were swearing at and beating everyone with batons all over their bodies, it didn’t matter if they were just passing by”.

Another eyewitness, Mahsa from Tehran, described how the security forces fired tear gas into the entrance hall of a metro station to stop people leaving to join the protest:

“There was so much tear gas … I was so mentally stressed and anxious that I initially didn’t even realise that I had been shot ... The special forces of the police were firing pointed pellets at people. My coat is now filled with holes and I have bruises on my body … The streets were filled with armed plain-clothed agents firing shots into the air and threating to shoot people … A member of the security forces chased me when they saw me filming the protest and that’s when I was shot in the leg with a pointed pellet … I’m in a lot of pain.”

Mahsa said the authorities had threatened doctors and she was turned away by three medical centres and even a veterinary clinic after seeking treatment. Yesterday, she was told by a doctor in a hospital in Tehran that she had to leave immediately because if the hospital’s intelligence department discovered she had been among the protesters she would be arrested. Amnesty has received similar accounts of clinics and hospitals in Tehran turning away injured people.

“The situation in Iran right now is even more painful than death. They are killing us slowly; they are torturing us to death.”

“Iran’s security forces have once again carried out a reprehensible attack on the rights of Iranian people to peaceful expression and assembly, and resorted to unlawful and brutal tactics.

“The Iranian authorities must end the repression as a matter of urgency and ensure the security forces exercise maximum restraint and respect protesters’ rights to peaceful expression and assembly.

“Detainees must be protected from torture and other ill-treatment, and all those who have been arbitrarily detained must be released.”

Scores of arrests, with reports of at least one sexual assault

There are reports that scores of people, including university students, have been arrested in cities where protests have taken place, including Ahvaz in Khuzestan province, Amol and Babol in Mazandaran province, Esfahan in Esfahan province, Shiraz in Fars province, Tabriz in East Azerbaijan province, and Tehran. Amnesty has received information that in at least two cities - Amol and Tehran - the authorities are denying detainees’ families information about their fate and whereabouts, amounting to enforced disappearance.

Amnesty has also received shocking allegations of sexual violence against at least one woman arbitrarily arrested by plain-clothed security agents and detained for several hours in a police station. According to an informed source, while in detention the woman was taken to a room where she was questioned by a security official who raped her by forcing her to perform oral sex on him and attempted forced sexual intercourse with her.

More than 300 killed in earlier wave of protests

The protests began on Saturday after the Iranian authorities admitted unintentionally shooting down a Ukrainian passenger plane following three days of denials. Protests expanded to include demands for a transformation of the country’s political system.

These latest protests followed a bloody crackdown in November which saw more than 304 people killed and thousands arrested. Amnesty has called on member of the UN Human Rights Council to hold a special session on Iran to mandate an inquiry into the unlawful killings of protesters, and the of wave of arrests, enforced disappearances and torture of detainees.