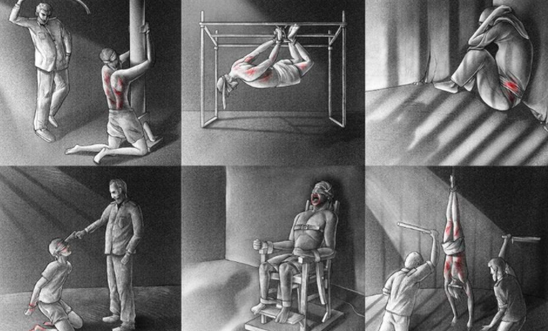 Electric shocks and waterboarding part of an array of torture techniques used, including against children as young as ten

Grossly unfair trials often lasted less than an hour, with death sentences handed down for ‘enmity against God’

Victims include children as young as ten, injured protesters arrested at hospitals while seeking medical care for gunshot wounds, as well as numerous human rights defenders - including minority rights activists, journalists and those who attended ceremonies to commemorate people killed during the protests.

Amnesty’s 77-page report - Trampling humanity: Mass arrests, disappearances and torture since Iran’s 2019 November protests, based on in-depth interviews with 60 victims or their relatives or close acquaintances, plus written information from several hundred others, as well as analysis of video footage and court documents - paints a harrowing picture of what happened to some of the 7,000 men, women and children arrested during the brutal crackdown in response to last year’s protests.

Amnesty has recorded the details of more than 500 people subjected to unfair criminal proceedings in connection with the protests. Many faced national security charges such as “gathering and colluding to commit crimes against national security”, “spreading propaganda against the system”, “disrupting public order” and “insulting the Supreme Leader”. Of these, at least three - Amirhossein Moradi, Mohammad Rajabi and Saeed Tamjidi - have been sentenced to death for “enmity against God” through acts of vandalism. Another, Hossein Reyhani, is awaiting trial on a charge carrying the death penalty.

Hundreds have been sentenced to prison terms, following grossly unfair trials presided over by biased judges behind closed doors. Trials frequently lasted less than an hour, and systematically relied on torture-tainted “confessions”. More than a dozen people known to Amnesty have received flogging sentences, with floggings carried out in at least two cases.

Protesters, bystanders and others were violently arrested, forcibly disappeared or held incommunicado, systemically denied access to their lawyers during interrogations, and repeatedly tortured to “confess” (see torture testimonies below).

Amnesty is urging the UN Human Rights Council and the Office of the UN High Commissioner for Human Rights to establish a UN-led inquiry into this and other systematic cases of human rights violations and official impunity in Iran.

“This litany of crimes and violations, committed with total impunity, has been accompanied by a wave of forced televised ‘confessions’ in state propaganda videos, and grotesque statements from top officials who have praised intelligence and security forces as heroes for their role in the brutal crackdown.

“Iranian prosecutors became complicit in the campaign of repression by bringing national security charges against hundreds of people solely for exercising their rights to freedom of expression, association and peaceful assembly, while judges doled out guilty verdicts on the basis of torture-tainted ‘confessions’.”

Amnesty’s research found that there was widespread torture by police, intelligence and security agents and prison officials – used against men, women and children, both during arrest and later in detention. Torture was used to punish, intimidate and humiliate detainees. It was also routinely used to elicit “confessions” and incriminating statements, not just about people’s involvement in the protests, but also about their alleged associations with opposition groups, human rights defenders, media outside Iran, as well as with foreign governments.

Amnesty found that victims were frequently hooded or blindfolded; punched, kicked and flogged; beaten with sticks, rubber hosepipes, knives, batons and cables; suspended or forced into holding painful stress positions for prolonged periods; deprived of proper food and water; placed in prolonged solitary confinement, sometimes for weeks or even months; and denied medical care for injuries sustained during the protests or as a result of torture.

Other documented methods of torture included stripping detainees and spraying them with cold water, and subjecting detainees to extreme temperatures and/or bombardment of light or sound; forcible extraction of the nails from fingers or toes; pepper spraying; forced administration of chemical substances; using electric shocks; waterboarding; and mock executions.

“They [my interrogators] would drench a towel in water and place it over my face. Then they would pour water slowly over the towel, which made me feel like I was suffocating … They would stop … until I started to feel better and then they would start torturing me this way again. They also punched, kicked and flogged me on the soles of my feet with a cable.”

“It felt like my entire body was being pierced with millions of needles. If I refused to answer their questions, they would raise the voltage levels and give me stronger electric shocks. I would shake violently and there would be a strong burning sensation coursing through my whole body.”

A victim from Tehran province who was suspended from his hands and feet from a pole in a painful method his interrogators referred to as “chicken kebab”, told Amnesty:

“The pain was excruciating. There was so much pressure and pain in my body that I would urinate on myself. My family know that I was tortured, but they don’t know how I was tortured. I feel choked with tears because there is no one here I can speak to.”

In all the cases documented by Amnesty, victims reported various forms of psychological torture to give forced “confessions”, including the use of degrading verbal insults; threats to arrest, torture, kill or otherwise harm their family members, including elderly parents or spouses; and threats to rape detainees or their female family members.

Prosecution and judicial authorities failed in their legal obligations to conduct independent and impartial inspections of detention facilities, including those run by security and intelligence bodies, and to ensure that legal provisions banning the use of secret detention and torture and other ill-treatment against detainees were respected.

Many detainees were subjected to enforced disappearance for weeks or even months while held in undisclosed locations run by the security and intelligence bodies, including the ministry of intelligence or the Revolutionary Guards. Some detainees were held in overcrowded prisons or police stations, military barracks, sports venues or schools.

Distressed relatives told Amnesty that they visited hospitals, morgues, police stations, prosecution offices, courts, prisons and other known detention centres to try to discover the whereabouts of their loved ones, but the authorities threatened them with arrest for doing so and warned them to keep quiet. In one case, the authorities arrested a family member of two forcibly disappeared people for asking about their relatives’ fate and whereabouts.

Amnesty is aware of three ongoing cases of enforced disappearance, where the authorities continue to conceal their location from their families. They include brothers Mehdi Roodbarian and Mostafa Roodbarian from Mahshahr, Khuzestan province.