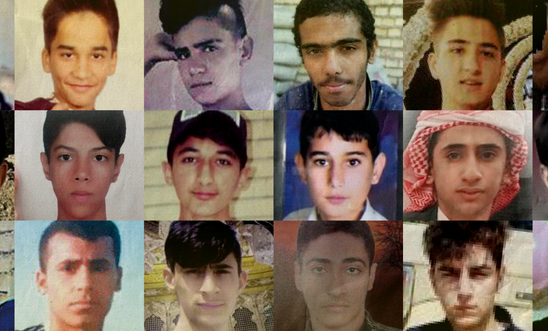 Some of the children killed by the security forces © Private

Bodies wrapped in shrouds returned to families only minutes before funerals

An investigation by Amnesty International has uncovered evidence that at least 23 children were killed by the Iranian security forces in the nationwide protests in November.

At least 22 of the children were shot dead by Iranian security forces who had unlawfully fired live ammunition at unarmed protesters and bystanders, according to Amnesty’s findings.

According to credible reports previously compiled by Amnesty, during 15-18 November at least 304 people were killed and thousands injured as the Iranian authorities crushed protests which swept the country following a government announcement over a fuel price rise. During and following the protests, the Iranian authorities arbitrarily detained thousands of people and subjected some to enforced disappearance and torture.

Amnesty’s 36-page report - ‘They shot our children’: Killings of minors in Iran’s November 2019 protests - shows how 22 boys (aged between 12 and 17) were killed by Iran’s security forces, and one girl, reportedly aged between eight and 12.

Amnesty has gathered evidence from videos and photographs, death and burial certificates, accounts from eyewitnesses and victims’ relatives, friends and acquaintances on the ground, as well as other corroborating information from human rights activists and journalists.

In ten cases, descriptions of injuries on death or burial certificates, or information from credible sources, show that deaths occurred as a result of gunshots to the head or torso - indicating that the security forces were shooting to kill. In two of the cases, burial certificates set out in detail the devastating impact on children’s bodies. One cited terrible injuries, including a shattered skull and brain damage. Another indicated that the cause of the death was a pierced heart and lung, and extensive internal bleeding.

In the case of another child, there are conflicting reports on the cause of death, with one referring to fatal head injuries sustained by beatings by security forces, and another referring to the firing of metal pellets at the victim’s face from a close distance.

Twelve of the 23 deaths recorded by Amnesty took place on 16 November, a further eight on 17 November and three on 18 November. The 23 were killed in 13 cities in six provinces across the country (Esfahan, Fars, Kermanshah, Khuzestan, Kurdistan and Tehran), reflecting the widespread nature of the bloody crackdown.

On 25 February, Amnesty wrote to the Iranian Minister of Interior, Abdolreza Rahmani Fazli, with a list of the 23 children, their ages and places of death. As of yesterday (3 March), Amnesty had received no response.

“The fact that the vast majority of the children’s deaths took place over just two days is further evidence that Iranian security forces went on a killing spree to quash dissent at any cost.

“As if the loss of their loved ones was not cruel enough an experience to bear, families of children killed during the protests are facing a ruthless campaign of harassment to intimidate them from speaking out.

“The authorities also seem to be desperate to prevent bereaved relatives finding out the full truth about the killings. This bears all the hallmarks of a state cover-up.

“It is imperative that member states of the UN Human Rights Council mandate an inquiry into the killings of protesters and bystanders, including these children, in the November protests.”

Amnesty spoke to relatives of some of the children who described being subjected to intimidation, including surveillance and interrogation by intelligence and security officials. At least one family received veiled death threats against their surviving children, receiving warnings that “something horrible” would happen if they spoke out.

Families of children who had been killed also reported being forced to bury them quickly in the presence of security and intelligence officials, preventing them from seeking independent autopsies - a move apparently aimed at suppressing incriminating evidence.

Amnesty’s research has found that the families of those killed in protests have generally been excluded from autopsies undertaken by the state forensic institute, and denied access to information on the circumstances of their deaths, including details of the ammunition that killed them and the weapon that fired it.

In some cases, officials even washed and prepared the bodies of victims for burial without notifying families and then handed them the bodies, wrapped in shrouds, just minutes before scheduled burials. Amnesty understands that in these cases, security and intelligence officials generally sought to prevent families from pulling back the shrouds to see the bodies of their loved ones. As a result, some families say they were not able to see the injuries.

In other cases, authorities have also refused to hand over the belongings of the victims to their relatives, including their phones, raising suspicions that these contained evidence of unlawful actions by the state.

Downloads
They Shot Our Children