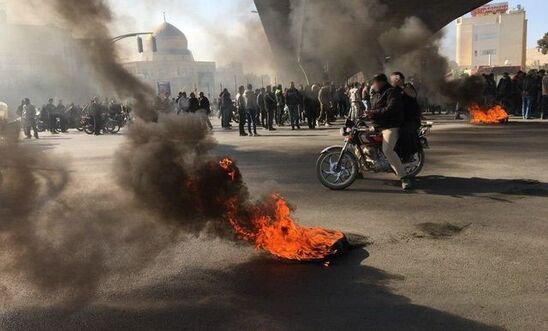 At least 304 killed, as authorities ordered internet companies to shut off service

The Iranian authorities shut down the internet during nationwide protests a year ago to hide the true scale of unlawful killings by the security forces, Amnesty International said today.

On the anniversary of the deadliest day of the protests, Amnesty has launched a new website (iran-shutdown.amnesty.org) documenting exactly how the lethal crackdown that killed at least 304 people was hidden from the world.

The site - a joint investigation between Amnesty and the Hertie School, in partnership with the Internet Outage Detection and Analysis (IODA) project, which has key data downloadable in English and Farsi - features more than 100 verified videos from 31 cities, showing the use of firearms, water cannon and tear gas against unarmed protesters and bystanders.

As protests intensified last November, the Iranian authorities implemented a near-total internet blackout - ordering different internet service providers to shut down. IODA observed steady drops in signals, which started when cellular operators were ordered to disconnect at around 2pm local time on 16 November. By 7pm, Iran had descended into digital darkness.

Amnesty’s research shows that this day - 16 November - was also the deadliest of the protests, with at least 100 protesters and bystanders killed.

Iran’s domestic internet remained online, allowing government services and banking to continue. It was only around five days later - at around 10am on 21 November - that internet access began to be restored, though it did not completely return until 27 November. Since then, internet access has been disrupted on several further occasions during new protests.

Organising peaceful protests, speaking openly against state policies and documenting human rights violations, all heavily rely on the ability to access the internet and are protected under international human rights law.

“The authorities deliberately blocked internet access inside Iran, hiding the true extent of the horrendous human rights violations that they were carrying out across the country.

“The government thought they could silence the population by taking the country offline, but the Iranian people were determined to tell the world the truth.

“Our new website is a tribute to the courage of everyone who captured on camera the scenes of violence that the authorities wanted to keep hidden.”

“Access to the internet is essential to protect human rights, especially in times of protest. The Iranian authorities must commit to never again taking the country offline, and must respect the right to peaceful protest.”

Amnesty first documented the use of lethal force against protesters in the days after the crackdown began, and recorded the details of at least 304 people killed in an investigation published in May. Amnesty verified the deaths by collating evidence from videos and photographs, death and burial certificates, accounts from eyewitnesses, victims’ relatives, and friends and acquaintances on the ground, as well as information collected by human rights activists and journalists. Further research by Amnesty’s Digital Verification Corps found that in the vast majority of cases there was no evidence that protesters had posed an imminent threat to life or of serious injury. As such, the intentional lethal use of firearms by the authorities was completely unwarranted and unlawful.

On 15 November 2019, protests erupted across Iran following a government announcement of fuel price increases. During five days of protests that followed, the security forces killed at least 304 men, women and children. The victims were mostly killed with shots to the head or torso, indicating that the security forces were operating a shoot-to-kill policy. The real number of deaths is believed to be far higher, but an ongoing cover-up by Iranian authorities means the true death toll may never be known.