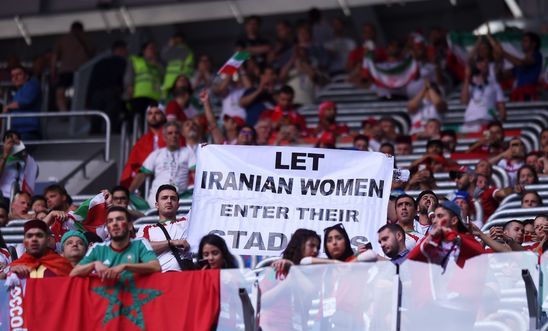 Only 3,500 places in 78,000-seater stadium available to women for Iran v Cambodia

Tomorrow’s game marks the first time Iran will allow women into Azadi Stadium since the shocking death of the “Blue Girl” fan Sahar Khodayari, who set herself on fire last month after being summoned to face charges in connection with her attempt to enter the stadium.

Under international pressure since Khodayari’s death, the authorities have allowed a quota of tickets to be sold to women for tomorrow’s game, though only four sections - totalling around 3,500 seats - of the 78,000-capacity Azadi Stadium have been allocated to women spectators.

“Iran’s decision to allow a token number of women into the stadium for tomorrow’s football match is a cynical publicity stunt by the authorities intended to whitewash their image following the global outcry over Sahar Khodayari’s tragic death.

“Anything short of a full reversal of the ban on women accessing all football stadiums is an insult to Sahar Khodayari’s memory and an affront to the rights of all the women of Iran who have been courageously campaigning for the ban to be lifted.

“The Iranian authorities should lift all restrictions on women attending football matches, including domestic league games, across the country.

“The international community, including world football’s governing body FIFA, must also ensure that women are permitted to attend all matches freely and without discrimination.

“FIFA has a responsibility to respect human rights throughout its operations, and the power under its statutes to take definitive and urgent action to address a situation which it has allowed to continue for far too long.”

At least 40 women arrested in past two years

FIFA has recently reiterated its position that women in Iran should be permitted to enter football stadiums to watch matches. Despite this and other calls, the Iranian authorities have not lifted all restrictions on women attending football matches.

Women in Iran face entrenched discrimination, including in relation to divorce, employment, inheritance and political office. In recent years, dozens of women peacefully protesting against the abusive, discriminatory and degrading practice of forced hijab by taking off their headscarves in public have been violently assaulted and arrested.