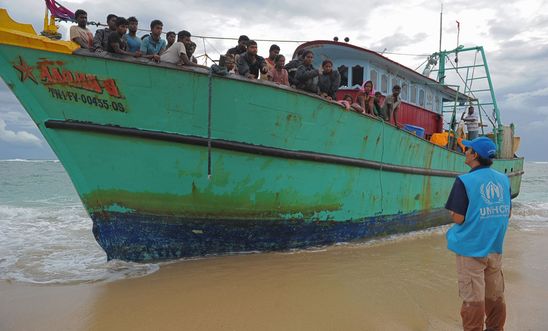 The Indonesian authorities in Aceh are endangering the lives of more than 40 Sri Lankan Tamil asylum-seekers by firing warning shots and threatening to push them back out to sea, Amnesty International said today.

Today’s latest attempt to force the boat off the coast of Indonesia’s Aceh province and back out to sea comes a day after local Aceh police fired warning shots in the air, terrifying at least five Sri Lankan Tamil women who tried to run ashore. The group aboard the boat includes a heavily pregnant woman and nine children.

Earlier today a Banda Aceh immigration office spokesman said the Tamil asylum-seekers who set out from Sri Lanka three weeks ago will not be allowed to disembark in Indonesia. Their original intended destination was Australia’s Christmas Island. Aceh police chief Inspector Gen. Husein Hamidi said that after providing food to the group of Sri Lankan Tamils and repairing their boat, the policy and navy were preparing to push them back into international waters.

The immigration office, police and navy in Aceh have ignored Indonesian Vice President Jusuf Kalla’s directions to provide the group with shelter. Instead, they have blocked off the area, denying those onboard the vessel access to the shore. Meanwhile, UNHCR officials are on standby in Aceh province ready to interview the group to verify their identities and determine their status.

“Instead of deploying these crude intimidation tactics that could put the lives of men, women and children at risk, the Indonesian authorities should come together to allow them to disembark safely so the UN Refugee Agency can interview them.

“Indonesia risks squandering the good will it generated when it provided assistance last year to hundreds of refugees and migrants who had been stranded on the Andaman Sea. In contrast to what happened in May 2015, developments this week invite comparisons with other countries that have a notorious record of setting desperate people adrift and at risk of death on the high seas.”

Aceh fishermen discovered the boat off the coast on 11 June and subsequently reported it to the Indonesian navy. The navy have prevented the boat from disembarking and its occupants applying for asylum, arguing that they lack proper documentation. Meanwhile, the Tamils remain on the boat, with the threat of being forced back into international waters hanging over them. The authorities are still preventing UNHCR officials from interviewing them to establish the veracity of their claims and identity.

The group had set out from India, more than 1,000 miles away, on a boat bearing an Indian flag. They’d been travelling for 20 days, headed for Australia, when, near the coast of Aceh, bad weather left the vessel stranded off Lhoknga.

Those on board have reportedly fled Sri Lanka, where the members of the Tamil minority have suffered persecution. Despite recent improvements, there are still concerns about discriminatory practices against Tamils by law-enforcement officials. The UN Human Rights Council noted in April that Sri Lanka had seen a spate of arrests of Tamils under the country’s Prevention of Terrorism Act. Tamil Sri Lankans remain deeply concerned about what they say is a persistent culture of surveillance in the north and east of the country.