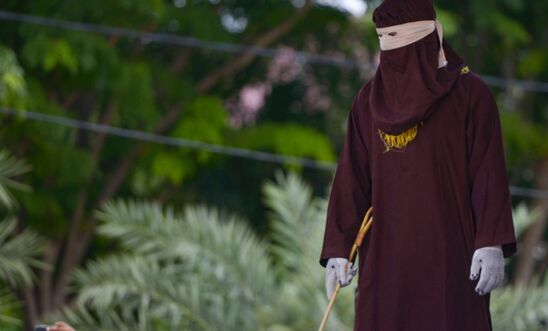 A member of the Sharia police waits before a public caning in Banda Aceh on October 21, 2019 © CHAIDEER MAHYUDDIN/AFP/Getty Images

Floggings reportedly took place in front of dozens of onlookers

Two women in the Aceh province of Indonesia were publicly whipped earlier this week after being found guilty of selling sex online.

Amnesty International has condemned the floggings as “cruel and inhumane”, and called for an immediate ban on flogging as a form of punishment in the country.

The women were subjected to around 100 lashes of the whip in Langsa City in Aceh on Monday after being found in violation of the Islamic Criminal Code in Aceh for selling sex online. The flogging reportedly took place in front of dozens of onlookers.

They two were arrested in March along with five other sex workers, who could also face being flogged if found guilty of similar offences.

“Flogging is a cruel and inhumane practice that causes both physical and mental trauma. It’s a punishment that must never be normalised nor tolerated.

“Public floggings are an all too regular occurrence in Aceh Province. We call on the Aceh authorities to repeal all regulations that can result in this appalling and degrading treatment.

So far this year, Amnesty has documented 37 cases of flogging punishments handed down by the authorities in Aceh against 173 people found guilty of violating the province’s Islamic Criminal Code. Aceh is the only Muslim-majority province in Indonesia that implements Islamic (Sharia) law. The Islamic Criminal Code was passed by the Aceh parliament in 2014 and came into effect throughout Aceh the following year. Punishable offences include: same-sex sexual relations, premarital sex and other sexual relations outside marriage, as well as offences such as the consumption of alcohol and gambling.