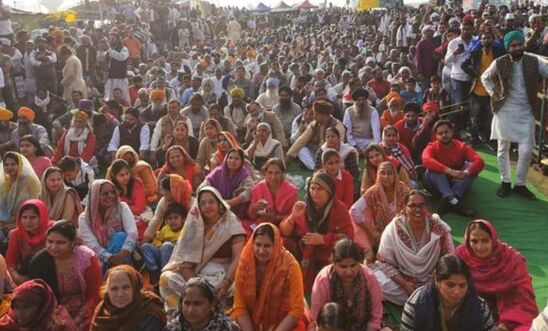 The Indian government must immediately stop its escalating crackdown on protesters, farming leaders and journalists, amid ongoing nationwide demonstrations against three controversial farm laws, Amnesty International said today. The organisation also called for the immediate and unconditional release of anyone arrested solely for peacefully exercising their rights to freedom of expression and peaceful assembly.

Amnesty raised concerns about the conditions protesters were being subjected to at the protest sites as well as the targeting of journalists reporting on the protests and the removal of Twitter accounts tweeting from the ground or in support of the protesters.

Amnesty said the protest sites now resemble war zones after the police erected metal and wire barricades, and blocked access using concrete and stone boulders.  More than 2,000 iron nails have reportedly been strewn on roads leading to the sites. The police have allegedly blocked access to portable toilets constructed by the farmers and will not allow street cleaners to clear the growing mounds of rubbish, leading to concerns about the spread of infectious diseases.  Internet services have been repeatedly suspended in Delhi's main protest sites and many adjoining districts.

“The Government of India needs to engage and listen to its people. The authorities must stop threatening, demonising, and arresting peaceful protesters and stop treating them as ‘anti-nationals’ or ‘terrorists’.

“Amnesty International calls for the immediate and unconditional release of activists and others who have been arrested for simply exercising their right to peaceful protest and for the government to stop the harassment and demonisation of protesters.”

Mandeep Punia, a freelance journalist for The Caravan, was arrested on the evening of 30 January, shortly after The Caravan published a story in which he reported that the ruling Bharatiya Janata Party had sent activists to attack the protesting farmers. Initially accused of obstructing the police, and then of violence, Mandeep Punia was detained for an initial period of 14 days without being allowed to see a lawyer but was later granted bail.

On 1 February Twitter  suspended hundreds of Indian accounts including those belonging to news websites and activists for more than 12 hours after the government said users were posting content inciting violence due to their use of the hashtag #FarmersProtests. Twitter reversed its decision by the evening.

However two days later, on 3 February, the Indian government served a notice on  Twitter to comply with an order to remove content and accounts related to hashtags linked to the farmers’ protest. The same day, many news media organisations reported that journalists' access to the protest sites were being hindered by the police.

Farming groups say more than 100 people have gone missing since a large Tractor Rally in Delhi, held on Indian Republic Day (26 January). Draconian laws like sedition and the UAPA (Unlawful Activities Prevention Act) have been used to clampdown on  protestors.