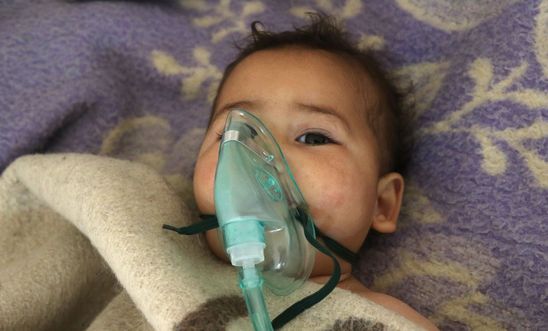 One of the children seriously injured in the attack © Getty/AFP

‘Children are the first ones to die, they cannot fight … back’ - Syrian doctor describing the aftermath

Amnesty International has gathered evidence pointing to the use of a nerve agent in the attack on the town of Khan Sheikhoun in Syria’s Idlib province yesterday.

If confirmed, the shocking attack would be the deadliest use of chemical weapons in Syria since 2013, with more than 70 people - many children - killed and hundreds more injured.

Amnesty is urging the UN Security Council, which is meeting this afternoon, to immediately adopt a resolution that will enforce the prohibition of chemical weapons attacks and facilitate bringing the perpetrators of these crimes to justice.

Amnesty has interviewed a nurse who was working at the Al Rahma hospital on the morning of the attack. He remembers checking his watch at around 6:20am yesterday when he was drinking coffee and all was quiet. He said:

“The sound of the explosion was not what we are used to - my colleagues and I thought that this one hadn’t exploded, because of the thump sound it made, not an explosion sound. A few minutes later, around 6:35am, the first victims were brought in - and then the flow just kept going until around 9am. There was a huge number of people and aides being brought in, and there were only four of us medics at the hospital at the time, and one of us also got infected.”

“The smell reached us here in the centre; it smelled like rotten food. We've received victims of chlorine attacks before - this was completely different. Victims had vomit from the nose and mouth, a dark yellow colour, sometimes turning to brown. Paralysis in respiratory functions - children were dying faster than adults because of this. We tried injections … but it just didn’t work. Victims were unable to swallow, they were unconscious, completely unresponsive.”

Many of the victims of the attack appear to have been poisoned as they slept in their beds. Chemical weapons experts working with Amnesty have confirmed that victims are very likely to have been exposed to a nerve agent, or an organophosphorus compound, such as Sarin. Experts do not believe that chlorine gas was used, as in previous chemical attacks in the Syrian conflict.

One piece of footage, which Amnesty has corroborated with other available content, shows nine children lying lifeless in the back of a pick-up truck. The children are naked or partially dressed; they appear to have died in their beds. No signs of trauma are visible on their corpses, which is consistent with chemical poisoning.

Other videos made in medical facilities in the aftermath of the attack show many people being treated for respiratory distress, as well as more images of dead children and adults. There are no obvious signs of bloody wounds or shrapnel injuries.

In total, Amnesty was also able to authenticate more than 25 pieces of video footage shot in the aftermath of the attack. Some videos are of sufficient quality for experts to observe victims with pinpoint pupils, described as a classic symptom of nerve gas poisoning. There are reports of medical staff suffering from secondary exposure, which would also be consistent with the use of a nerve agent. In some videos, victims displayed no twitching or jerky movements which experts agree suggest cases of extreme poisoning. In others, including videos of children, the patients are trembling.

A doctor working at the specialised surgery hospital, some 30 miles away from the site of the attack, also gave his account of the incident:

“Victims were sent first to the closest hospitals, so by the time they reached us, it was around 8am. The attack happened at 6.42am exactly. Victims, including around 70 dead, have reached a total of around 400 people, who were spread out between the different medical centres, and those taken to Turkey. Most of the victims we received were still alive. Those who died didn’t make it to us. Two persons brought in here died in hospital. Victims reached us in different states - some had muscular and respiratory paralysis, which we tried treating with tranquilisers and Atropine. They had secretions from the mouth and nose that were white. Some were completely unconscious. Some had severe muscular pain. Children are the first ones to die, they cannot fight this back. We only had one child who, thank God, survived.”

Amnesty has repeatedly called upon the UN Security Council to end the cycle of impunity that exists with regard to war crimes in Syria, referring the situation to the Prosecutor of the International Criminal Court. In February, Russia and China vetoed a draft Security Council resolution to impose Chapter VII measures for the “unauthorised transfer of chemical weapons, or any use of chemical weapons by anyone in the Syrian Arab Republic”.

“The Security Council must immediately vote to investigate this attack and help bring those responsible to justice.

“Failure to do so would be catastrophic, risking further emboldening governments and armed groups in Syria to target civilians in war crimes with banned and conventional weapons alike.

“The use of chemical weapons is strictly prohibited under international humanitarian law and constitutes a war crime. The international community must show outrage and take all possible measures to protect the Syrian people and the people of the world from such horrific acts.”

Khan Sheikhoun is a small town on the Damascus highway in rural Idlib, and is one of the few areas in north-eastern Syria to remain under opposition control. In recent months Idlib has become a refuge for those fleeing violence in Aleppo and elsewhere. It has suffered sporadic bombardment by Syrian artillery positions and aircraft since 2012. Recently the bombing has intensified in response to a surprise offensive by armed opposition groups in Hama. Aircraft of the US-led coalition have also been carrying out attacks in Idlib Governorate.