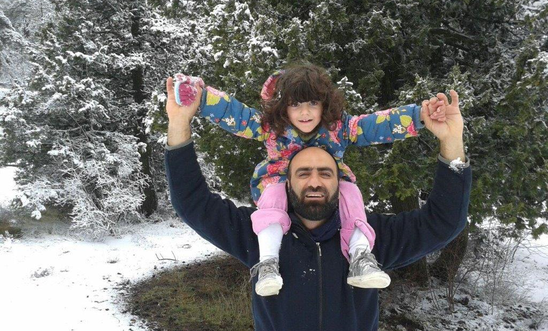 Ahmed H with his daughter © Private

Ahead of tomorrow’s early release of Ahmed H, a Syrian man unfairly jailed for “complicity in act of terror” during clashes with border guards at the Serbia-Hungary border in September 2015, Eda Seyhan, Amnesty International’s Europe Counter Terrorism Campaigner, said:

“After spending three-and-a-half years behind bars, Ahmed will finally be reunited with his wife and two young daughters. His release is an overwhelming relief for the family, but the fact is he should never have been prosecuted, let alone convicted, for this offence in the first place.

“The absurd charges against Ahmed were emblematic of the systematic scapegoating of refugees and migrants, and those seeking to defend them. His prosecution was a potent symbol of Prime Minister Orbán’s ‘illiberal democracy’. It had nothing to do with justice but was instead part of the Hungarian government’s draconian crackdown on human rights.

“By blatantly misusing terrorism-related provisions and riding roughshod over the law in their treatment of Ahmed, the Hungarian authorities showed they will stop at nothing to demonise refugees and migrants.”

Ahmed is expected to fly back to Cyprus to be reunited with his family soon after his release.

In August 2015, Ahmed left his family home in Cyprus to help his elderly parents and six other family members flee Syria and find safety in Europe. One month later, they found themselves among hundreds of refugees stranded at the Hungarian border after police fenced off the crossing with Serbia.

Clashes broke out as some refugees attempted to get through. Hungary’s police responded with tear gas and water cannon, injuring dozens. Some people threw stones, including Ahmed. But news footage also clearly shows Ahmed using a megaphone to call on both sides to remain calm before the clashes.

For this, a Hungarian court found him guilty of involvement in an “act of terror”, under Hungary’s extremely vague counter-terrorism laws, and sentenced him to 10 years in prison, later reduced to 7 years and then 5 with eligibility for early release.