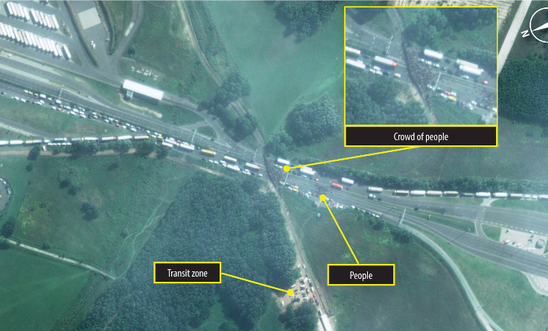 Crowds of People at Roeszke Border © DigitalGlobe for Amnesty International.

New satellite images released by Amnesty International today show Hungary's frenzied efforts to repel refugees and asylum-seekers this week. The images are released as Croatia announced that it is following suit and closing its borders with Serbia.

The images show how the hastily erected fences caused an immediate bottleneck and forced people to mass outside the fence. In a dramatic week, Hungary deployed riot police, dogs and helicopters to the border and used tear gas and water cannon to push back the desperate crowds. Hungary also introduced a new law under which anyone attempting to cross the fence could be jailed for up to three years. Hungarian courts have already found 22 people guilty of “illegal entry” to Hungary since the border closure, and 43 other cases are pending.

One pair of images from Sunday and Tuesday  (13 and 15 September) starkly illustrate how sealing the border crossing near Horgoš in Serbia and Röszke in Hungary on Tuesday, quickly resulted in a bottleneck of trapped people seeking entry to Hungary and the European Union.

Within the two days, a stretch of open motorway was suddenly bisected by a razor-wire fence, which the Hungarian authorities have been erecting along the country’s entire southern border with Serbia. The satellite images show masses of people beginning to camp out in the open on the Serbian side. In the days after these images were taken, numbers swelled still further.

Some of the satellite images show how, before the border closed, reception points just inside the Hungarian side of the border were bustling with activity, as recently as last Sunday (13 September), with lots of people and queues of buses visible. By Tuesday those reception points lay empty, with refugees and asylum-seekers forced to mass outside the fence and seek safe haven in other countries.

Amnesty is releasing the satellite imagery just hours after the Croatian authorities announced the closure of seven out of eight of its border crossings with Serbia, after thousands of refugees and asylum-seekers who had been blocked from entering Hungary began streaming into Croatia yesterday. Croatia and Hungary are member states of the European Union, while Serbia is not. Amnesty said the series of satellite images should serve as a warning to Croatia, Slovenia and other countries currently considering closing their borders.

“The shocking scenes from the ground this week at the Horgoš-Röszke border crossing have shown the human toll of Hungary's irresponsible actions.

“These images give a deeper sense of the speed and scale of Hungary’s operation to seal its borders, which culminated in a dire situation for refugees and asylum-seekers left in limbo.

“Hungary’s unlawful actions should serve as a stark warning to other governments.

“It's perverse to treat people fleeing war and persecution as a threat to border security, and any country that follows this example is heading down a dangerous road.

“This is not the time for individual countries to insulate themselves but rather to work together to find solutions.”

The sudden mass movement of people into Croatia yesterday, was directly prompted by the Hungarian authorities’ border closure on Tuesday. Hundreds of Hungarian soldiers, riot police, dogs and helicopters have been patrolling the completed razor-wire fence, and new laws came into force to jail anyone who attempts to break through for up to three years.

As of this morning, the Szeged Regional Court had already found 22 people guilty of “illegal entry” to Hungary since the border closure, and had received 43 new cases this morning.

Hungary is violating its international obligations by its almost blanket refusal to allow anyone access to asylum. Amnesty is calling on the Hungarian authorities to repeal amendments criminalising ‘illegal entry’ and to provide immediate access to Hungarian territory, asylum procedures and adequate reception conditions to those in need of international protection.