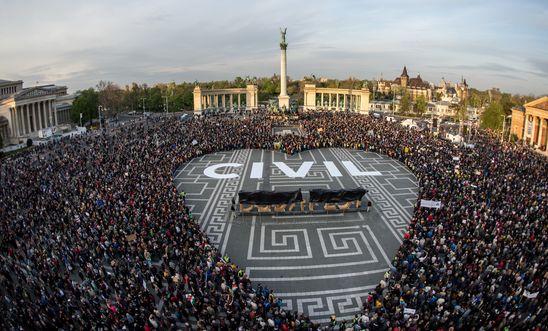 Reacting to the European Parliament’s decision this morning to trigger Article 7 proceedings for Hungary, Berber Biala-Hettinga, Amnesty International’s expert on human rights in the EU, said:

“In today’s historic vote, the European Parliament rightly stood up for the Hungarian people and for the EU. They made it clear that human rights, the rule of law and democratic values are not up for negotiation.

“A resounding majority of MEPs today rejected and condemned the retrograde policies of the Hungarian government, which are taking Hungary away from the path of shared EU values. Hungary firmly belongs in the EU, but xenophobia and disrespect for fundamental freedoms and rights most certainly do not.

“Today, European parliamentarians stood up for what is right. European member states must now follow suit and take urgent action before Hungary slides towards arbitrary rule beyond the point of no return.”

Earlier today, MEPs voted to back a proposal to trigger proceedings under Article 7.1 of the Treaty of the European Union (TEU) in response to concerns over the country’s alarming backslide on fundamental rights and the rule of law.

The report on which the MEPs voted listed numerous reasons for serious concern in Hungary. They included concerns related to the functioning of the country’s constitutional system, the independence of the judiciary, freedoms of expression and association, as well as the right to equal treatment, the rights of people belonging to minorities, including Roma and Jews, and the fundamental rights of migrants, asylum-seekers and refugees.

Article 7 enables the EU to promote and safeguard its founding principles such as the rule of law and respect for fundamental rights and freedoms. If the European Council is unanimous in finding the government of Hungary to be in “serious and persistent breach” of the EU’s founding principles, Article 7 proceedings could ultimately lead to sanctions such as a suspension of Hungary’s voting rights in the Council.

Countless organisations, including the European Commission, UN bodies and the Council of Europe, as well as civil society organisations in Hungary and elsewhere in the EU, have repeatedly drawn attention to the country’s failure to uphold fundamental rights and the rule of law over the past years.

Amnesty, the Hungarian Helsinki Committee and the Hungarian Civil Liberties Union have all drawn attention to alarming developments since the renewed electoral victory of the ruling party Fidesz in April.