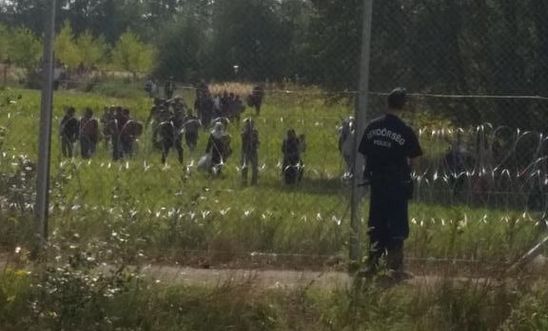 Reporting from the Hungary border, where a delegation has been observing events today, Amnesty International warned that by effectively closing its border to refugees and meeting those fleeing conflict and persecution with razor wire, troops and draconian new laws, Hungary is showing the ugly face of Europe’s shambolic response to the growing refugee crisis.

The organisation deployed a team of researchers to the Hungary-Serbia border where dozens of soldiers, riot police, dogs and helicopters are patrolling a newly completed razor wire fence. Under new laws which come into force today refugees who attempt to break through could be jailed for up to three years. The new laws also criminalise anyone who helps migrants and refugees cross the border with a prison sentence of between one and five years.

With the border now almost entirely sealed, Amnesty researchers saw hundreds of refugees streaming towards a closed border post in the mistaken belief it was open. They also witnessed a group of young men from Syria desperately examining the fence to see if they could somehow break through.

“For refugees fleeing from terrifying conflict zones to be met by such an intimidating show of militarised force is shocking, and a woefully irresponsible response to people already traumatised by war and brutality.

“While thousands more are expected to make their way to Hungary, this ‘raise the drawbridge’ mentality will simply redirect, but not put an end to, desperate and dangerous journeys.

“Fences and draconian laws are not a solution. These are people who are trying to get to safety. The only solution is for Hungary and the EU to start meeting their international obligations, show solidarity and ensure that asylum-seekers have orderly access to territory and asylum procedures.”

New transit zones have been established along the border with Serbia where refugees will be processed and held - but under the new laws these zones are not considered to be on Hungarian territory.

Since Serbia is considered a safe third country of transit by Hungary, Amnesty fears that most of the refugees detained in these transit zones will have their asylum claims immediately rejected. The organisation fears that, rather than evaluating each person’s claim individually, asylum-seekers will be assessed and returned en masse to Serbia.

If an asylum seeker has his or her claim to asylum rejected they will be entitled to a judicial review but he or she will have to appeal within three days. Amnesty is concerned about this extremely tight timeline, and about accessing legal aid in the closed transit zones.