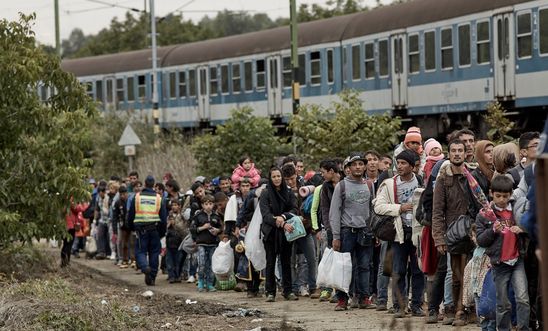 A queue of refugees and migrants on Hungary's border © Thomas Rafa

The Hungarian government has invested three times as much in razor-wire fencing and border controls as it spends annually on receiving asylum-seekers, Amnesty International has revealed in a new report published today (8 October), as EU ministers gather in Luxembourg for high-level meetings to discuss the crisis.

The 26-page report, entitled Fenced Out, shows how the Hungarian authorities have spent more than 100 million Euros on the border fence, compared with the 27.5m allocated to the country’s Office of Immigration and Nationality for 2015. The report also outlines how Hungary’s draconian measures to control its borders have repeatedly violated international human rights law.

Amnesty’s report is based on testimony and observations from extensive research Hungary last month, with researchers examining police treatment of refugees and migrants, reception conditions, as well as new restrictions placed on access to asylum in the country.

The Hungarian Parliament has recently passed new laws resulting in an aggressive response to the crisis that includes flanking its borders with soldiers and authorising police to use rubber bullets, tear gas and stun- and smoke- grenades. Armoured vehicles mounted with machine guns and soldiers armed with special forces-style firearms have been positioned along the border with Croatia.

Other new problematic laws have allowed Hungary to place Serbia on a list of “safe countries” of origin and transit, to which asylum-seekers are now to be returned, without regard to severe obstacles they face in accessing protection in that country. Refugees and asylum-seekers who enter Hungary irregularly also face criminal prosecution, in breach of international human rights law.

Meanwhile, in a move apparently designed to stoke up xenophobia, the Hungarian government has put a questionnaire to more than 8 million citizens, gauging their views – for instance – on whether people who cross borders irregularly should be detained for longer than 24 hours. It has also invested 1.3 million euros on a billboard campaign featuring messages such as “If you come to Hungary, don’t take the jobs of Hungarians”.

Amnesty is calling on the EU to hold Hungary to account for its human rights failures and to protect people on the move by creating safer, legal routes before winter hits.

“Hungary is a few razor-wire coils away from completely sealing off its borders with Croatia and Serbia. Even those who do manage to squeeze through are almost certain to be returned to Balkan countries of transit.

“Hungary is effectively transforming itself into a refugee protection-free zone, with blatant disregard for its human rights obligations and the obvious need to work with other EU and Balkan countries to find collective, humane solutions to the current crisis.

“The cost of these abhorrent anti-refugee operations is staggering and comes at the price of the rights, health and well-being of thousands of people.

“This money would be far more wisely invested in saving lives and improving futures. It’s time for all EU member states to urgently invest in a compassionate and coordinated solution.”

Amnesty is calling on EU member countries and institutions to prevent further escalation of human rights violations in Hungary by activating the preventive mechanism foreseen under Article 7(1) of the Treaty of the European Union. The mechanism allows the European Council to issue a warning to member countries where there is “a clear risk of a serious breach” of the respect for the rule of law and human rights.

“The EU has the power to trigger formal discussions with Hungary over its appalling treatment of refugees and migrants, and send a clear message that ‘enough is enough’ to those states that disregard EU and international law. The EU should do this before it is too late.”

Testimonies gathered by Amnesty reveal the repeated use of excessive force by the Hungarian authorities.

Hiba, a 32-year-old asylum-seeker from Iraq, suffered a fracture to her thigh after being pushed by a Hungarian police officer against a wall at a train station in Budapest.

“I have been living in uncertainty and stress for months,” said Hiba, now in Germany. “We are now waiting for a decision on our asylum claim but people [other asylum-seekers] are telling us we might be rejected and sent back to Hungary and then back to Iraq. But there is no way how we can go back to Tikrit, it’s not safe.”

The briefing details the Hungarian authorities’ pitiful humanitarian response with a complete lack of adequate reception facilities. In the absence of essential supplies such as food and tents, refugees and asylum-seekers massed at Budapest’s main train stations, Keleti, Nyugati and Deli, had to rely on support provided largely by volunteers and through donations.

“I want to start a new life in peace… They are treating us like animals, worse than animals,” said Dina, a 46-year-old Syrian woman who had been taken into police custody and kept for 16 hours without food or water. “It prevents us from staying here. We feel that we are not welcome.”