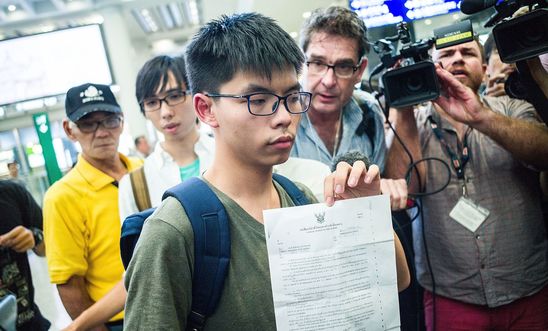 The Hong Kong authorities’ relentless pursuit of jail terms for three leaders of the pro-democracy Umbrella Movement is a vindictive attack on freedom of expression and peaceful assembly, Amnesty International said today.

Earlier today, Hong Kong’s Court of Appeal handed Joshua Wong, Alex Chow and Nathan Law between six and eight months in prison for their roles in a demonstration that helped spark the city’s 2014 pro-democracy Umbrella Movement. Prosecutors pursued harsher punishments for the trio after they were originally given non-custodial sentences at their first trial a year ago.

“The relentless and vindictive pursuit of student leaders using vague charges smacks of political payback by the authorities.

“The real danger to the rights of freedom of expression and peaceful assembly in Hong Kong is the authorities’ continued persecution of prominent democracy activists. Prosecutions aimed at deterring participation in peaceful protests must be dropped.”

The convictions relate to a specific incident on 26 September 2014 at the beginning of the student-led pro-democracy protest outside government headquarters in Hong Kong. On that day, several students climbed into a fenced-off forecourt of the legislative complex, commonly known as Civic Square. The square had been a popular site for previous peaceful protests on other occasions, before the authorities’ restricted access to it in the summer of 2014.

Wong and Law had previously been ordered to carry out community service, but this was increased to six-month and eight-month prison terms respectively at today’s hearing. Alex Chow’s original three-week suspended prison sentence was increased to seven months in jail.

The vague provisions of Hong Kong’s Public Order Ordinance, on which this prosecution was based, have been repeatedly criticised by the UN Human Rights Committee for failing to fully meet international human rights law and standards on the right of peaceful assembly.