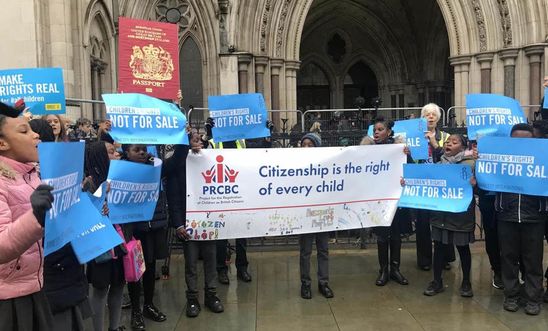 ‘This is a landmark ruling. But the fight for justice for children born and growing up in the UK goes on’ - Carol Bohmer

The High Court in London has today ruled the £1,012 fee the Home Office charges children to register as a British citizen unlawful.

In a landmark case, brought forward by the Project for the Registration of Children as British Citizens (PRCBC), the court found a “mass of evidence” showing that the fee prevents many children from registering British citizenship, leaving them feeling “alienated, excluded, ‘second-best’, insecure and not fully assimilated into the culture and social fabric of the UK.”

The case, which is supported by Amnesty International UK, has been brought by three claimants – two children, A and O, aged 3 and 12 and both born in the UK; and the Project for the Registration of Children as British Citizens.

The current administrative processing cost of a child’s registration claim is only £372. The Home Office uses the remaining £640 to cross-subsidise the immigration system.

Today’s judgment requires the Home Office to reconsider the fee and ensure that children’s best interests are taken fully into account in doing so. The court has made clear that where a child has a right to British citizenship it will generally be in the child’s best interests to be registered as British – something the Home Office had denied in evidence to the court.

Responding to the judgment, O, who has lived in the UK her entire life and gave a witness statement to the court, said:

“I am glad I got to tell the court my story.

“I was born in this country and have lived here all my life. I feel as British as any of my friends and it’s not right that I am excluded from citizenship by a huge fee.

“I want to be able to do all the things my friends can. I don’t want to have to worry they will find out I don’t have a British passport and think that means I am not the same as them.”

Solange Valdez-Symonds, solicitor for the two children, A and O, said:

“It is significant that the court has recognised British citizenship is the right of these and thousands of children and that the consequences of blocking their registration rights is alienating and harmful.

“While that recognition is a great step forward, the fact remains that tens of thousands of British children are growing up in this country deprived of their rights to its citizenship, including by this shamelessly profiteering fee.

“For too long, children and their citizenship rights have not been respected. That must change. The Government should make an immediate start by ending the use of this fee to raise revenue for the Home Office.”

While the court ruled the Home Office failure to consider children’s best interests rendered the fee unlawful, it rejected a separate argument that there was simply no power in law to set the fee above administrative cost and beyond the reach of many children entitled to citizenship.

The court described that argument as “powerful and sustained” but decided it could not uphold the argument due to an earlier ruling of the Court of Appeal. However, the court has today granted a certificate to the claimants to apply direct to the Supreme Court for permission to appeal on this point. It has also granted permission to appeal to the Home Office.

Carol Bohmer, Chair of the Project for the Registration of Children as British Citizens (PRCBC) said:

“This is a landmark ruling. But the fight for justice for children born and growing up in the UK goes on.

“PRCBC was founded barely seven years ago because of the scandal of children entitled to British citizenship being treated as if they had no more right to be in their home country than a visitor.

“The damage done to thousands of children is dreadful and still far from fully quantifiable. So much more still needs to be done so that children, their parents and carers, know their citizenship rights and to ensure the many barriers to exercising these rights are removed, including this profit-making fee.”

Maria Patsalos, Immigration Partner at Mishcon de Reya who acted for the Project for the Registration of Children as British Citizens, said:

"This hugely important case touches the lives of thousands of children and we have seen that it affects generations of families living in difficult circumstances. British citizenship is essential for a sense of belonging and securing rights in the UK, and the current fee is creating a barrier which for some is impossible to overcome.

"It has been an honour to work with so many articulate and passionate young people to help fight for their rights. Whilst this is a step in the right direction, we encourage urgent action to set the fee at a much lower and more accessible level, removing the profit element, and to introduce fee waivers for children who need them."

Amnesty International UK attended the hearing on 26-27 November 2019 in support of PRCBC. The day before, Amnesty’s Children’s Human Rights Network handed in a 40,000 strong petition calling upon the Home Secretary to: