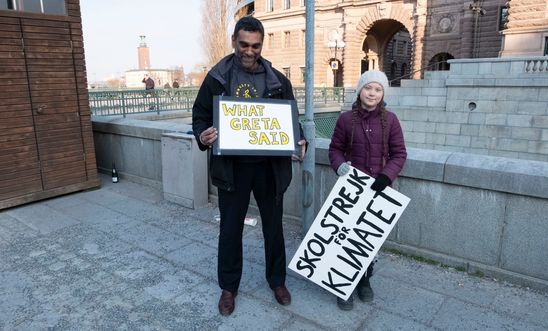 Climate activist Greta Thunberg and the Fridays for Future movement of schoolchildren have been given Amnesty International’s ‘Ambassador of Conscience’ award for 2019, the human rights organisation announced today (7 June).

The Fridays for Future movement was started by Greta Thunberg, a teenager from Sweden who last August began protesting outside the Swedish parliament - skipping school every Friday demanding the Swedish government take more serious action to tackle the climate crisis.

Her efforts have inspired a global movement, with the most recent Fridays for Future schools strikes seeing more than one million young people from all over the world take part, with demonstrations in more than 100 countries.

“It is a huge honour to receive Amnesty International’s Ambassador of Conscience award on behalf of Fridays for Future. This is not my award, this is everyone’s award. It is amazing to see the recognition we are getting and know that we are fighting for something that is having an impact.

“To act on your conscience means that you fight for what you think is right. I think all those who are part of this movement are doing that, because we have a duty to try and improve the world. The blatant injustice we all need to fight against is that people in the global south are the ones who are and will be most affected by climate change while they are the least responsible for causing it.”

“The Ambassador of Conscience award celebrates people who have shown unique leadership and courage in standing up for human rights. I can think of no better recipients this year than Greta Thunberg and the Fridays for Future climate strike movement.

“We are humbled and inspired by the determination with which youth activists across the world are challenging us all to confront the realities of the climate crisis. Every young person taking part in Fridays for Future embodies what it means to act on your conscience. They remind us that we are more powerful than we know and that we all have a role to play in protecting human rights against climate catastrophe.

“Young people are often told they are the leaders of tomorrow. I am so glad that Greta Thunberg and the Fridays for Future activists ignored that message. If they wait until tomorrow, there will be no future for any of us. They have proved that they are already leaders, and now it’s time for adults to follow their lead.”

Nelson Mandela among past awardees

Amnesty’s Ambassador of Conscience award was founded in 2002 to celebrate individuals and groups who have furthered the cause of human rights through acts of conscience, confronting injustice and using their talents to inspire others. The award was inspired by the poem From the Republic of Conscience, written for Amnesty International by the late Irish poet Seamus Heaney. Past awardees include Nelson Mandela, Malala Yousafzai, Ai Weiwei, Harry Belafonte, Joan Baez and Colin Kaepernick.

While the climate crisis is usually understood through its impacts on our natural environment, the devastating consequences of these changes is falling hardest on some of the world’s poorest, most marginalised people, making it an urgent human rights issue. Amnesty has said the failure of governments to act on the climate crisis may well be the biggest inter-generational human rights violation in history.

“Human rights and the climate crisis go hand in hand. We can’t solve one without solving the other. Climate change means people won’t be able to grow food, their homes will come under threat and their health will be compromised. Governments have a duty to protect us, so why are they doing nothing to stop climate change from devastating our lives?”

“Sometimes I feel really sad because some of the people I try to talk to won’t listen. Some people insult us, others think we are politicians, and others ignore us entirely, they tell us maybe we won’t finish what we’ve started.  But I can assure everyone that we are really determined to finish what we have started, because our futures are on the line.”

The youth activists behind Fridays for Future are now calling on adults to join them. On Friday 20 September, ahead of the United Nation Climate Action Summit in New York, activists will commence a week of climate action with a worldwide strike for the climate.

Around the world, attacks against ordinary people who stand up for freedom, justice and equality are surging. Authorities around the world are misusing their power to crack down on human rights defenders - imprisoning, torturing and even killing them for speaking up. In 2018, 321 defenders in 27 countries were targeted and killed for their work - the highest number ever on record. Amnesty is calling on the UK Government to show the world that protecting human rights defenders is a priority.