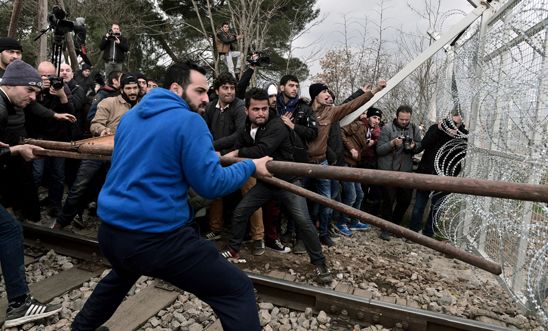 The chaos at the Greece-Macedonia border crossing of Idomeni – with 7,000 asylum-seekers stranded in dire conditions amid a heavy security build-up – is the result of a shameful spate of discriminatory border closures, said Amnesty International today.

“Tragically, there seems to be more willingness among European countries to coordinate blocking borders than to provide refugees and asylum-seekers with protection and basic services.

“Every single person, no matter what their nationality, has a right to seek asylum and the right to be treated with dignity. Practices that deny admission to specific nationalities of asylum-seekers and refugees are unlawful and can result in pushbacks.”

A police agreement in mid-February between all countries on the Balkans routes appears to have triggered the exclusion of Afghan nationals from admission at border crossings, while the European Union also increased pressure to stop the practice of “waving through” refugees and asylum-seekers.

Tensions are rising as more and more refugees and migrants continue to arrive without any clarity on what will happen to them next. Today, a group of people were met with tear gas from Macedonian security forces when they tried to break through the border fence.

Amnesty has witnessed refugees and asylum-seekers, including families with very young children and people with disabilities sleeping rough. There is only transit capacity for a maximum of 2,500 at the border.

Thousands of other asylum-seekers are staying in bad conditions at the port of Pireus. Several men and women told Amnesty today about a lack of basic services there in addition to a total lack of information on where they should go next.

“The pressure on the Balkans to stop letting people through, with no alternative ways of moving people out of Greece, leaves refugees and asylum-seekers, including young children fleeing the horrors of war and persecution, stranded in dire conditions without any idea of what happens next.

“How many children sleeping in the cold does it take for Europe to finally grasp that the only long-term solution is organising safe and legal ways for refugees and asylum-seekers to receive the protection they so desperately need?”