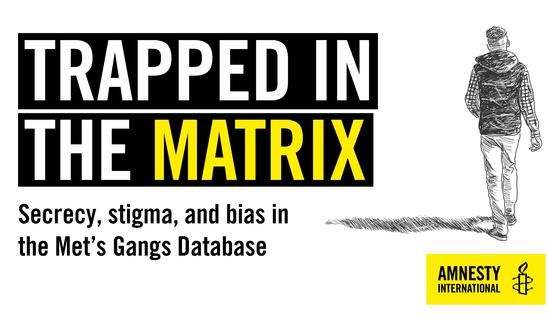 “The investigation by the Information Commissioner’s Office confirms a lot of our own findings into the Gangs Matrix: namely, that it is currently not fit for purpose.

“As the ICO state, the absence of effective central governance has risked causing damage and distress to many people – mainly young, black men – who are on the Gangs Matrix.

“While we welcome the findings, we would urge the Mayor’s own forthcoming review to ensure that their own recommendations are robust, and address the concerns raised in our report Trapped In The Matrix.

“Ultimately, if the Gangs Matrix cannot be brought in line with international human rights standards, then it should be dismantled.”

Trapped In The Matrix

Earlier this year, Amnesty published a damning report into the Gangs Matrix, declaring it as the “wrong tool for the wrong problem”.

The 55-page report, Trapped in the Matrix, raises serious concerns about how individuals come to be placed on the database, how the information is shared with other agencies such as housing associations and schools, and the adverse effect being listed on the Matrix can have for the young black males who are disproportionately impacted. The researchers spoke to more than 30 professionals who use the Gangs Matrix, including the police and other organisations, as well as community members and young people affected by the Matrix.

The Metropolitan Police’s gang-mapping database, known as the Gangs Matrix, was launched in 2012 as part of a highly-politicised response to the 2011 London riots. It lists individuals as “gang nominals” with each given an automated violence ranking of green, amber or red. As of October 2017, 3,806 people were listed on the Matrix. More than three-quarters (78%) of people on the Matrix are black, a disproportionate number given the Met’s own figures show that only 27% of those responsible for serious youth violence are black. The youngest person on the Matrix is 12 years old, and 99% of those listed are male.