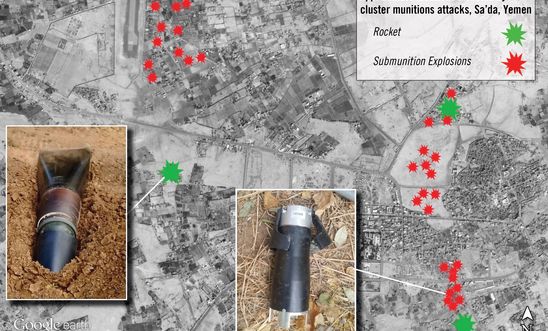 The strikes have been in residential areas of Sa'da city

The attack, striking three residential areas and surrounding farmland at 10.30pm on 15 February, is the third confirmed use of Brazilian cluster munitions documented by Amnesty in the last 16 months.PR

Following the attack, Amnesty interviewed eight local residents - including two witnesses - one of whom was injured in the incident. Amnesty also spoke to a local activist and analysed photographic and video evidence provided by Yemen’s munitions watchdog, the Yemen Executive Mining Action Centre (YEMAC), which inspected the site witda cityhin 30 minutes of the attack. YEMAC staff also confirmed the use of the same type of cluster munitions in a separate attack in late January in the directorate of Abdeen, three miles south of Sa’da city.

According to witnesses and local residents, rockets struck the residential areas of Gohza, al-Dhubat and al-Rawdha on 15 February, resulting in submunitions also landing on homes in al-Ma’allah and Ahfad Bilal and surrounding farms.

While Amnesty is aware of the presence of a military objective - Kahlan Military base, two miles north-east of the city of Sa’da - the presence of a military objective in itself would not have justified the use of internationally-banned cluster munitions - particularly not its use on populated civilian neighbourhoods. And even though Brazil, Yemen, Saudi Arabia and members of the Saudi Arabia-led coalition participating in the conflict in Yemen are not parties to the Convention, under the rules of customary international humanitarian law they must not use inherently indiscriminate weapons, which invariably pose a threat to civilians. The customary rule prohibiting the use of inherently indiscriminate weapons applies to their use under all circumstances, including when the intention is to target a military objective.

“How many more civilians need to be killed, injured, or see their property destroyed through use of these internationally-banned weapons, before the international community condemns the use of cluster munitions by the Saudi Arabia-led coalition and pressures coalition members to immediately become parties to the Convention on Cluster Munitions?

“The Saudi Arabia-led coalition absurdly justifies its use of cluster munitions by claiming it is in line with international law, despite concrete evidence of the human cost to civilians caught up in the conflict.

“Cluster munitions are inherently indiscriminate weapons that inflict unimaginable harm on civilian lives. The use of such weapons is prohibited by customary international humanitarian law under all circumstances. In light of mounting evidence, it is more urgent than ever for Brazil to join the Convention on Cluster Munitions and for Saudi Arabia and coalition members stop all use of cluster munitions.”

Latifa Ahmed Mu’eed, 22, described the attack in Ahfad Bilal, which took place while she was asleep at home. She was with her husband Talal al-Shihri, her three-month old son, Hasan, and three-year old son, Hussain:

“The bomb came into the house, into the bedroom from the ceiling. There is a big round hole in the ceiling. At the time, we heard a big explosion and seconds later the bomb exploded in the room and we got hurt. Three exploded right outside the house … The children were unhurt but in shock … My husband sustained shrapnel injuries on his foot. I hurt my left foot and we went to al-Salam hospital that very night.”

The family fled nearly 50 miles to Sa’da city four months ago after their home in Baqim, seven miles south of the Saudi Arabian border was bombed. Latifa Ahmed Mus’id explained:

“We were forced to leave our home in Baqim when it was bombed. The bomb went right into our living room and destroyed the house. Everyone had to leave the area. The bombardment was constant. We left two-three months after the strike on our house … We made our way to Sa’da on foot. We walked for [12 miles] and I was six months pregnant at the time and then a car gave us a lift to Sa’da city.”

Meanwhile, a local resident of al-Ma’allah, one of the affected areas in the recent attack, described to Amnesty hearing a loud explosion:

“I heard a really loud sound. And directly after I heard very dense sounds, as if something was spreading. It was so rapid and it lasted 20-30 seconds.”

Yahya Rizk, head of the YEMAC 12th team, told Amnesty about his team’s visit to the neighbourhoods of al-Rawdha and Ahfad Bilal:

“We found one carrier and one unexploded submunition in al-Rawdha. Al-Rawdha is a densely-populated area where bombs [submunitions] penetrated the roofs of two houses. One bomb went through the roof and injured a man and his wife in Ahfad Bilal - it went into their bedroom at [approximately] 11pm. They were taken to the hospital the same night. Most of the damage was to the property, houses and cars. We noted 12 impact holes in al-Rawdha, by the fruit farms. And 12-13 impact sites in Ahfad Bilal. We found one unexploded bomb [submunition] in al-Rawdha which came down from a tree and landed in the soil, which we photographed.”

Members of the YEMAC team also confirmed carrying out a sweep of residential areas in densely-populated Gohza where they noted impact holes and damage to houses. Yahya Rizk said: “The bombs [submunitions] landed in people’s porches and between houses. They all exploded and no people were injured. But windows were all broken and up to 30 cars damaged.”

Based on the description of the YEMAC team, and after examining photographs and videos of the aftermath of the attack - including photos of the carriers and one unexploded submunition - Amnesty was able to identify the remnants used in the attack as being an ASTROS II surface-to-surface rocket. The ASTROS II is a truck-loaded, multiple-launch rocket system (MLRS) manufactured by Brazilian company Avibrás. ASTROS II is capable of firing multiple rockets in rapid succession, with each rocket containing up to 65 submunitions, with a range of up to 50 miles, depending on the rocket type. The company’s marketing presentations describe it as being “an important defence system with great deterrent power”.

Amnesty documented the first known use of the ASTROS II rocket in Yemen on 27 October 2015 in Ahma, north of Sa’da city, where at least four people were wounded, including a four-year old girl. In May 2016, Amnesty found further evidence of the same type of cluster munitions in villages 19 miles south of the Saudi Arabian border in Hajjah. Meanwhile, last December, Human Rights Watch also documented the use of Brazilian cluster munitions on Sa’da city.

According to the Landmine & Cluster Munition Monitor body, Avibrás has sold this type of cluster munition to Saudi Arabia in the past.

To date, Amnesty and HRW have documented the use of seven types of air-delivered and ground-launched cluster munitions made in Brazil, the USA and the UK.

On 19 December, the Saudi-run Saudi Press Agency reported that the Saudi Arabian government would stop using a UK-made cluster munition - the “BL-755” - but contended that “international law does not ban the use of cluster munitions” and while some states are party to the Convention on Cluster Munitions (CCM), “neither the Kingdom of Saudi Arabia nor its coalition partners are state parties” to the CCM. It further claimed that UK-made cluster munitions used by the coalition had been used against “legitimate military targets” and that the cluster munitions were “not deployed in civilian population centres” and that the coalition “fully observed the international humanitarian law principles of distinction and proportionality”.

Earlier in 2016, Amnesty had discovered the use by the Saudi-led coalition of the UK-manufactured BL-755 in northern Yemen. One UK cluster bomb had apparently malfunctioned and left scores of deadly unexploded “bomblets” strewn over a wide area near a farm in Al-khadhra village in Hajjah governorate, six miles from the Saudi Arabia border. A local farmer reported seeing the cluster bomb attack in January 2016. For months after this, the UK Government denied that there was reliable evidence of the use of UK cluster munitions by the Saudi-led coalition in Yemen.