France: Huge police operation planned for G7 protests must not end in violence and mass arrests 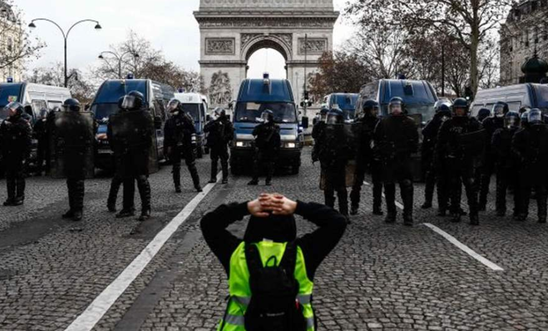 A protester kneeling in front of riot police in Paris, France.

13,000 police and restrictions on protests are cause for “grave concern”

Ahead of this weekend’s G7 summit during which authorities are expected to unnecessarily scale up police and judicial measures, including the unprecedented deployment of judicial personnel, Amnesty International’s France Researcher, Marco Perolini, said:

“As thousands of protesters prepare to take to the streets this weekend, the announced presence of more than 13,000 police, extensive restrictions on public assemblies and enhanced judicial measures to arrest and prosecute protesters, gives us cause for grave concern.

“The hasty erection of pre-fabricated cells in front of the court in Bayonne and the arrival of dozens of additional prosecutors and judges, are a signal of intent that could lead to indiscriminate mass arrests and fast-track convictions.

“While the authorities have a duty to ensure public order, they also have an obligation to facilitate peaceful assemblies. They must avoid the sort of heavy-handed policing we have seen during recent demonstrations. They must not apply draconian laws to prosecute protesters who are exercising their right to demonstrate peacefully.”