Europe: Stranded refugees must be immediately allowed to dock 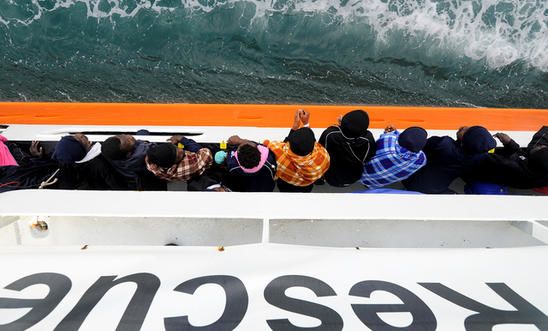 Twelve refugees and migrants who have been stranded in the Central Mediterranean on a Spanish fishing boat for almost a week must be allowed to disembark in Europe as soon as possible, Amnesty International said today.

Six days after they were rescued from the water by the Nuestra Madre de Loreto vessel, the 12 people - including two children - remain on board in overcrowded conditions and stormy waters.

“These people have risked their lives to escape human rights abuses in Libya, and they should be disembarked without delay in the nearest place of safety in either Malta or Italy.

“Under no circumstances should they be returned to Libya, where they would face arbitrary detention and possibly torture and other abuses.

“European governments appear to be sending a signal that people in danger at sea should be either abandoned there or sent back to Libya. By closing ports and boosting the Libyan Coast Guard’s capacity to intercept people at sea, they are blatantly disregarding their obligations under both maritime and human rights law.

“It is time for European governments to stop playing with human lives and share responsibility for receiving people seeking safety.”

According to media reports, the refugees and migrants were rescued on 22 November in international waters around 80 nautical miles from Libya. The precise details of the incident are yet to be clarified. However, reports suggest that many of them jumped into the sea after being approached by a Libyan Coast Guard vessel and were then pulled out of the water by the crew of the Nuestra Madre de Loreto.

This is the latest in a series of instances of ships in the Central Mediterranean rescuing people at sea only to be blocked from docking in the nearest safe port.