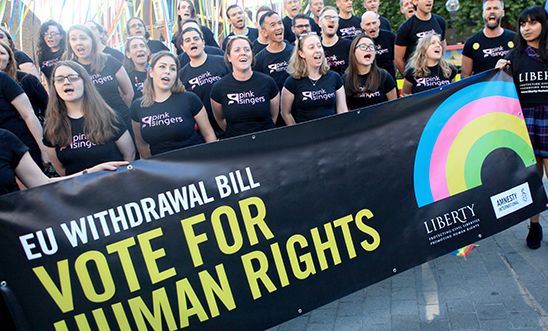 “This is a bleak day for human rights in the UK and undoubtedly today’s vote leaves people poorer in terms of protections after Brexit. People didn’t vote to weaken their human rights, but today MPs at Westminster did.

“The Charter of Rights is the sort of security net that you only come to miss when you need it most, and it’s a huge shame that MPs have not recognised its importance as their colleagues in the Lords did just weeks ago.

“There’s no good reason for any rights to be reduced through Brexit - in this Bill or anywhere else. Human rights should not be collateral damage in the wider Brexit dispute.

“There’s still a chance for these protections to be restored, including during ‘ping-pong’ between the Houses, and we intend to ensure that they are.”

Responding to the successful passing of a Government concession amendment which proposed the General Principles be retained for a limited period after Brexit, Kate Allen added:

“It’s a relief that people will be able to rely on the ‘general principles’ to protect their rights for years after Brexit, but this is a temporary fix, a sticking plaster.

“It buys the Government more time, and has no doubt bought off some of the serious concerns of MPs, but this can’t just be a case of kicking the can down the road and forgetting about it.”

The Government’s original EU Withdrawal Bill proposed three major changes which would reduce or threaten rights and protections for people in the UK after withdrawal: