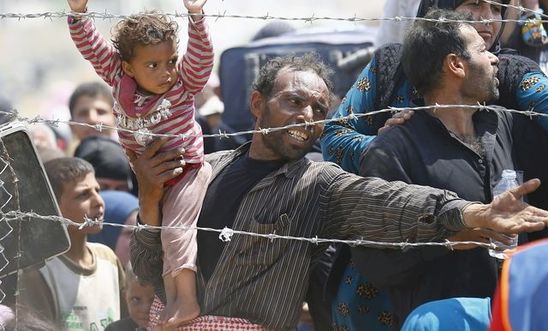 European leaders’ attempts to use Turkey as their border guard to stop refugees and asylum-seekers heading to the European Union (EU) is a dangerous and deliberate ploy to shirk their responsibilities to people fleeing war and persecution, warns Amnesty International ahead of the EU and Turkish leaders’ meeting today in Brussels.

EU efforts to address the refugee crisis have focused on ensuring that refugees and asylum-seekers remain in Turkey, instead of sharing the responsibility for their protection and assistance.

“Using Turkey as a ‘safe third country’ is absurd. Many refugees still live in terrible conditions, some have been deported back to Syria and security forces have even shot at Syrians trying to cross the border. Europe has an absolute duty to protect refugees and must make the bold decision to fast-track significant, unconditional resettlement as a matter of urgency.

“If the EU is going to hand over such enormous, much-needed sums to Turkey, it has to come with absolute guarantees that it will be spent on support for refugees and that the current human rights violations stop outright.

“It is unacceptable to expect that the responsibility for refugees and asylum-seekers should be entirely carried by a country that already hosts three million refugees.”

Amnesty has documented unlawful detentions and deportations of refugees and asylum-seekers by Turkey since an EU-Turkey Joint Action Plan was initially agreed in October 2015. Amnesty continues to receive reports of the forcible return of refugees from Turkey to Syria.

Despite Turkey’s efforts to accommodate Syrian refugees, many live in desperate conditions, and hundreds of thousands of Syrian children receive no formal education. Asylum-seekers from other countries face similar problems and remain in a legal limbo without their claims for refugee status being processed.

The EU is currently offering Turkey three billion euros (£2.3 billion) as part of the EU-Turkey action plan on migration.

Turkey is already the largest host to refugees in the world, with nearly three million refugees in the country. Tens of thousands more in Syria have reached Turkey’s border and are seeking safety. According to UNHCR data, 91 per cent of people crossing by sea from Turkey to Greece since 1 January 2016 come from Syria, Afghanistan or Iraq and are therefore highly likely to be in need of international protection.