England: Housing must be made human right in law to address spiralling crisis 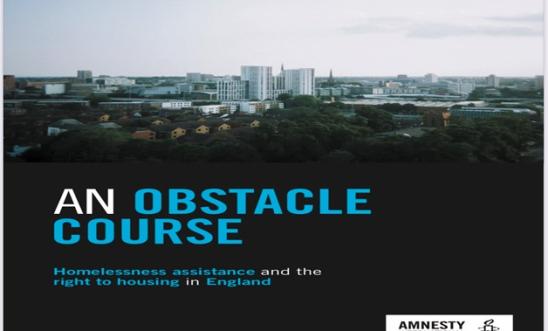 Access to safe and affordable housing must be made a human right in law to ensure the Government is accountable for properly resourcing efforts to address the homelessness crisis in England which is predicted to worsen with the extreme hike in the cost-of-living, Amnesty said today (7 June), as it published a major new report on the issue.

The 83-page report - ‘An Obstacle Course: Homelessness Assistance and the Right to Housing in England’, the first research on homelessness Amnesty has undertaken in the country - examines the law, policy and practice relating to homelessness in England from a human rights perspective and paints a bleak picture of the scale and depth of the problem.

According to official Government statistics, 270,000 are currently facing homelessness in England.

Amnesty’s report highlights how key Government policies have resulted in thousands of people being denied housing. The report finds that attempts to ration a severe shortfall in adequate, affordable housing are shutting people out of the system leaving them destitute, often at great risk to their mental and physical health and personal safety.

Many people who have been homeless for long periods have experienced physical and mental ill-health and drug or alcohol dependence. According to the ONS the average age of death for people sleeping rough or in homelessness accommodation is 45.9 years for men and 41.6 years for women.

Amnesty is calling on the Government to fulfill its international human rights obligations and remove the barriers that have been put in place that deny people their right to housing and to urgently build more social housing to address the deficit.

“Housing is a human right, not a luxury and it needs to be protected in law.

“It’s very convenient for the Government that people often assume a person is homeless as a result of personal circumstances, but in truth homelessness is a result of a systematic failure of Government.

“The absurd obstacle course which a person experiencing homelessness has to get through in order to ‘qualify’ for housing help is intended to lock them out, because there simply isn’t enough housing for the ever-growing need.

“Draconian and highly subjective rules regularly result in the most vulnerable being the least likely to be helped.

“Many people subject to immigrations restrictions are excluded both from public funds and permission to work. Made unable to support themselves and denied housing help, they inevitably end up sleeping rough. The system is rigged against them.

“We should get rid of the idea of being ‘intentionally’ homeless, it’s outdated and cruel. It only serves to force scared people into accepting inadequate, unsuitable accommodation.

“The current housing system in England is simply not fit for purpose. It needs wholescale reform to restore fairness and compassion.

“Unless housing is rightfully recognised as a basic legal human right, there is no way to hold the Government to account for its woeful failings.”

New polling data commissioned by Amnesty and conducted by Savanta ComRes  to accompany the report launch found that most people tend to assume individual circumstances, such as relationship issues or drug dependency, were most likely to be to blame for a person experiencing homelessness. More than half (54%) of UK adults reported that they would assume a person was experiencing homelessness for such a personal reason.

A much lower percentage of people (36%) thought Government failure to provide sufficient housing is most likely to be responsible. Amnesty is campaigning to shift public opinion and inform people that prolonged homelessness is always a result of a systematic failure of Government to realise the right to a safe home, no matter how a person might have found themselves in that position originally. Amnesty said more needed to be done to make it known that housing is a human right.

There is clearly a pervasive concern that people might themselves end up experiencing homelessness in the near future, or that someone they know will, indicating the fear that homelessness is likely to be a growing problem given the bleak economic outlook. Nearly one in three (31%) UK adults said they are concerned about ending up sofa-surfing or in temporary accommodation in the next 5 years as a result of housing costs, while two in five (41%) say they are concerned someone they know will.

Since the resource is so inadequate to the scale of need, various obstacles have been put in place by local authorities to ration access to housing. People seeking housing are locked-out through a series of stringent and draconian entitlement criteria.

Under the current system, local authorities in England do not have a duty to provide housing to people if they fall into one of the following three groups:

The report is highly critical of all three of these conditions of access which contravene the UK’s international human rights obligations.

The report is particularly critical of the fact that local authorities do not have a duty to provide homelessness support to those subject to immigration control when they have or are treated as having ‘no recourse to public funds’ status.

Irregular migrants who are part of this group are often among the most vulnerable as well as likely to be among the poorest people experiencing homelessness, as they are not entitled to public money, are often unable to work and not permitted to rent accommodation. Because most hostels and other forms of temporary accommodation are linked with access to state social security benefits, these are automatically inaccessible to them. For many people in this situation, the only options that remain are informal renting where affordable, sofa-surfing or rough-sleeping, all of which place them at high risk of abuse and exploitation.

Amnesty is calling for the current “priority need” condition to be abolished. At present, local authorities are required to assess whether anyone found to be eligible for homelessness assistance is deemed to be in a “priority need” category.

This determination of priority need is a significant block for many, especially people who are classified as “single homeless” or those without dependent children.

At least six women interviewed by Amnesty had had their children taken into care by social services and so were deemed “single homeless” - and therefore not in priority need. Without a secure place to live, it was impossible for them to obtain work, find housing and get their children back.

Mandy*, whose children were taken in by family members, told Amnesty:

“What made the traumatic experience even worse was, as being classed a single homeless female. I was therefore not ‘priority need’ and it took longer to be given a place where I felt safe. This prolonged the period of me being separated from my children”.

Amnesty is also calling for the practice of someone being deemed “intentionally homeless” to be scrapped. At present, a person can be deemed to be “intentionally” homeless on a number of often highly subjective grounds. These include:

-they are assessed as having refused to accept “suitable” accommodation offered by the local authority.

Other grounds include having been evicted because of anti-social behaviour or having lost their home due to a prison sentence.

Several interviewees told Amnesty that they felt they had no choice but to live in sub-standard temporary accommodation because if they refused, they would be declared “intentionally homeless” and the local authorities would no longer be responsible for finding them suitable housing.

“The accommodation is extremely unsuitable; I have been here seven months now. The housing conditions are affecting me mentally. There are cockroaches, the room is mouldy and damp. I have sent pictures to the council. On the phone the lady from the council told me that if I refused, I would be considered intentionally homeless… that I had made myself homeless.”

Amnesty has launched a new action to coincide with the report calling on Michael Gove to take the human right to housing a reality for all, including by removing barriers to accessing safe and good quality accommodation, and to urgently invest in building more social housing as well as review the impact of priority need, intentionality and no recourse to public funding on access to housing support. The action is at www.amnesty.org.uk/homeless

Names of people experiencing homelessness quoted in the report have been changed to protect their identity.