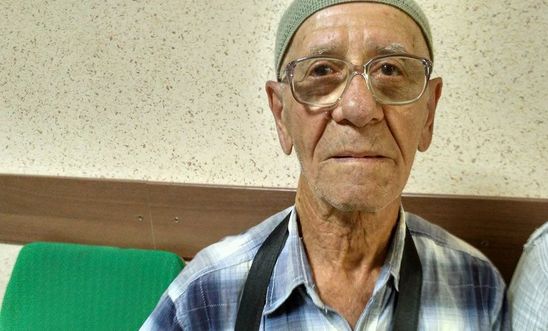 Server Karametov, 76, has been jailed for ten days © Valery Balayan

The Russian authorities in Crimea must immediately release a 76-year-old man with Parkinson’s disease who has been jailed for holding a placard in support of persecuted Crimean Tatars, Amnesty International said today.

Server Karametov, a Crimean Tatar, was last night sentenced to ten days’ “administrative detention” for protesting outside the Supreme Court of Crimea  in support of prisoner of conscience Akhtem Choygoz and other victims of politically-motivated prosecution by the de facto authorities in the occupied region’s capital Simferopol.

Video footage of the arrest on 8 August shows a lone, frail, elderly man holding a hand-written placard being dragged away by four police officers and forced into a police car.

Late yesterday, a judge from the Zheleznodorozhny District Court of Simferopol found Mr Karametov guilty of resisting “lawful orders” from police officers. In addition to his detention he was fined 10,000 roubles, almost as much as the average monthly retirement benefit in Crimea of 11,000 roubles.

While in court, Karametov fell ill and an ambulance had to be called. His lawyer said he suffers from Parkinson's disease and may be deprived of his essential medication while in detention.

Akhtem Chiygoz, who was named on the placard, is the deputy leader of the Crimean Tatar representative body Mejlis, which is banned in Russia as an “extremist” organisation. He has been detained since January 2015 on trumped-up charges of organising “mass disturbances” on 26 February 2014 during a protest that took place shortly before the Russian occupation and annexation of Crimea.

“Arresting a frail senior citizen and throwing him behind bars for holding a placard is the latest grotesque example of the Russian authorities’ incessant crackdown on peaceful activism by the Crimean Tatar community.

“This case epitomises the ongoing, brutal persecution of Crimean Tatar activists. Server Karametov should be released immediately and unconditionally.

“With Mejlis banned as ‘extremist’, its leaders imprisoned or forcibly exiled from their homeland and Crimean Tatar-language media purged from Crimea, how much further can these reprisals go?”

Under an overly-restrictive Russian law on public assemblies, virtually any street protest involving two or more persons requires an express prior approval by the authorities. So-called single-person pickets are not subject to this requirement. However, the law imposes a complete prohibition on protest in certain areas, including in the vicinity of courts.