Egypt's use of banned cluster bombs in Sinai confirmed 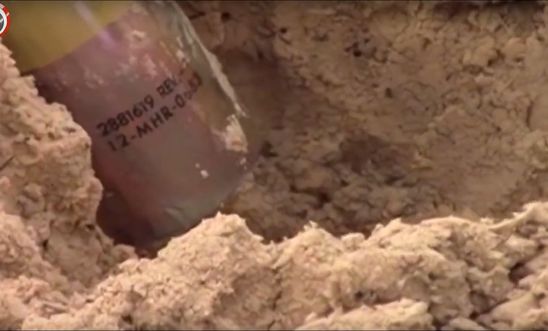 Analysis of a video released by the Egyptian Armed Forces proves beyond doubt that banned cluster munitions have been used in recent airstrikes in North Sinai, Amnesty International said today.

On 21 February, the Egyptian military released a video on its official Twitter account of what it claimed were improvised explosive devices planted by “terrorist elements”. However, Amnesty has analysed this video and confirmed it shows an unexploded US-made Mk 118 cluster munition, which could only have been dropped by the Egyptian air force.

Amnesty arms experts’ analysis of the submunition shown in the video reveals that it is untampered with and in good condition despite its age, with the serial number still clearly visible on its side. This suggests that the submunition has been deployed in recent operations.

Cluster munitions are delivered by rockets or artillery which contain smaller explosive submunitions that spread out randomly over a wide area. Many of these submunitions often fail to detonate and can remain unexploded on the ground, posing a threat years after a conflict ends.

A previous video released by the Egyptian armed forces on 9 February, at the start of the latest operation in North Sinai, showed US-made CBU-87 Combined Effects Weapons, a type of cluster bomb, being loaded onto fighter jets set to be deployed to North Sinai.

In July 2017, AMAQ news, an IS-linked outlet, released a video claiming an F16 fighter jet dropping two cluster bombs. Amnesty experts analysed that video, concluding that it had not been doctored. The experts further confirmed that the F16s shown in the video displayed the Egyptian flag on their tails. The two cluster bombs dropped were of the type Mk 20 Rockeyes dispensers that dispense the same type of 247 Mk 118 cluster submunitions.

“This new video confirms our worst fears, that the Egyptian Armed Forces are using cluster bombs in North Sinai. This shows a horrifying disregard for human life and international law.

“Claims that these weapons were planted by members of armed groups just do not stand up to scrutiny. The video shows a type of US-made munition which we know the Egyptian army owns, which can only be deployed from certain types of aircraft that we know are used in the Egyptian Air Force.

“Cluster bombs are among the vilest weapons in modern warfare, inherently indiscriminate and capable of killing and maiming civilians for years after their deployment.

“The Egyptian Armed Forces must immediately stop using these weapons and destroy all stockpiles. All states supplying arms to Egypt, including the USA, must immediately suspend exports that carry a risk of being used for serious human rights violations.

“Cluster bombs are banned under international law for a very good reason.”

According to US Department of Defence documentation obtained by Human Rights Watch and cited in their cluster munition survey, Egypt had 321,000 submunitions in Rockeye bombs stockpiled as of 2007.

On 9 February, the Egyptian Armed Forces announced the commencement of the military operation “Sinai 2018”. They claimed the operation aimed to “end terrorism” by targeting armed groups and their weapons depots in North and Central Sinai. The military has requested the urgent deployment of medical reinforcements to North Sinai and neighbouring governorates given the increased military presence in the area.