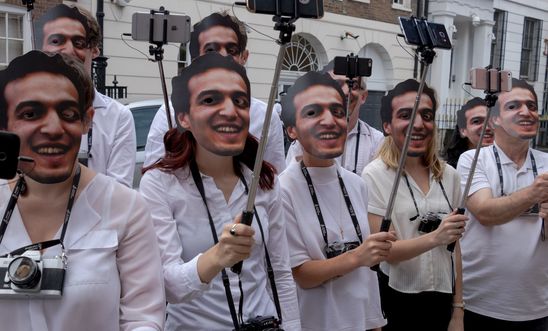 “Mahmoud Abou Zeid’s long overdue release brings to an end a painful ordeal for him and his family.

“As a prisoner of conscience, he should never have been forced to spend a single minute behind bars - let alone five and a half years.

“After his release he faces ludicrous probation measures which require him to spend 12 hours of each day at a police station from 6pm to 6am for the next five years. These outrageous measures will severely restrict his liberty and should be lifted immediately.

“Mahmoud Abou Zeid was arrested and imprisoned solely for doing his job as a journalist. His conviction, more than five years later, on trumped-up charges during a grossly unfair mass trial alongside more than 700 other defendants, was a mockery of justice.

“Mahmoud Abou Zeid has been the victim of an appalling injustice and the authorities must offer full reparation for this outrageous violation of his human rights.”

On assignment at Cairo sit-in protests

Mahmoud Abou Zeid was arrested at the Rabaa al-Adawiya sit-in in Cairo on 14 August 2013 while on assignment for the London-based photo agency Demotix. He was arrested along with two foreign journalists who were released the same day.

He was charged with 24 offences, including murder. During his trial, the prosecution failed to provide sufficient evidence to establish that he was responsible for the offences with which he was charged.

He was convicted last September in a mass trial of more than 700 people, including senior leaders of the Muslim Brotherhood, and was sentenced to five years in prison - which he had already served in pre-trial detention - plus a fine followed by five years of probation. A six-month prison term was added to his sentence because he could not afford to pay the fine.